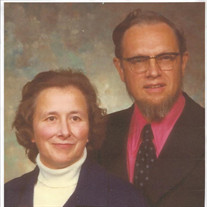 Wilma E. Hollopeter Shank, age 97, died peacefully in her sleep on March 31, 2022, after complications from an incapacitating fall. She was born May 30, 1924, in the home of Ray and Velma Spicher Hollopeter at Boneta in Medina County, Ohio. After 12 years at Sharon Center schools, she graduated valedictorian (1942). In her first semester at Goshen College, she formed close friendships with seven freshman women and one David Shank. She majored in Home Economics, minoring in English and French. After her B.A. (1946), Wilma returned to Sharon Center to teach high school for two years and married David Shank in 1948. In 1950, the Mennonite Board of Missions invited the couple to re-establish, 400 years after its decimation, an Anabaptist community in Belgium, where they worked as a team for 23 years. Teaching and study took them back to Goshen College and to the University of Aberdeen (Scotland). For the next decade, Abidjan (Ivory Coast) served as their base for relating to African Independent Churches and establishing a Documentation Center about AIC history. In retirement, they built a home near Amigo Centre (Sturgis, Michigan) that drew fond gatherings of family and friends. In 2010, Goshen College honored them with its "Culture for Service" Award. Wilma outlived her husband David and her four siblings (Sheldon, Carl, Phoebe Yoder, and Glenn). She is survived by her children Rachel (Jim) Shenk (Goshen), Crissie (Tim) Buckwalter (Goshen), Stephen (Brussels, Belgium), Mike (Carol) (Madison, Wisconsin), her former daughter-in-law Jean Gerber (Singers Glen, Virginia), four sisters-in-law, nine grandchildren, six great-grandchildren, many nieces, nephews, and their progeny, as well as three of the seven college friends who for 76 years corresponded by circle-letter. Her letter writing did not spare the politicians who were supposed to represent her peace position. Wilma wishes to be remembered for living her life with conviction, continual challenge, and joy exercising her gifts of homemaking, parenting, witnessing, and working with David for more than 62 years. Many guests on three continents enjoyed her gracious hospitality. Her family and friends also remember her as a woman of deep Christian faith, a gracious and caring presence, an avid reader, a lover of diverse music, an exemplar of good taste, and an eternal optimist. Following Wilma's wishes, her burial in Violett Cemetery will be private. A celebration of her life with music and memories is scheduled for Saturday, April 9, 2022, gathering at 2 p.m., service at 3:30 p.m. at the Metzler Meeting Room, Greencroft Healthcare. Covid protocol in effect. Seating is very limited. In lieu of flowers, please donate to Benin Bible Institute or to Amigo Centre.

Wilma E. Hollopeter Shank, age 97, died peacefully in her sleep on March 31, 2022, after complications from an incapacitating fall. She was born May 30, 1924, in the home of Ray and Velma Spicher Hollopeter at Boneta in Medina County, Ohio.... View Obituary & Service Information

The family of Wilma E. Hollopeter Shank created this Life Tributes page to make it easy to share your memories.