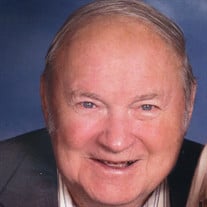 William Richard “Bill” Butts passed away peacefully at his home in Elkhart, Indiana on Monday, December 30, 2019, with his wife Cheri at his side. He had been in declining health the past several years. Bill was born March 1, 1931, in Williamsport, Lycoming, Pennsylvania to Earl William Butts and Alma Helen Taber-Butts. They both preceded him in death. He was also preceded in death by his first wife, Dorothy Jacobsen Butts, a sister, Charlotte Butts Ludwig, two brothers, Earl Edward Butts and Carl Butts, and two step-sons, Lee Leffert and Dale Nelson. He is survived by his loving wife, Cheri Davis Butts of Elkhart, Indiana. He is also survived by one brother Robert (Regina) of Mishawaka, Indiana, two sons, James Butz (Debra) of Jefferson City, Tennessee and Jacob Fenton of West Bend, Wisconsin, two daughters, Barbara Zarling (Joel) of Campbellsport , Wisconsin and Beth McAnn (Sean) of Pensacola, Florida, a step daughter, Leslie Leffert of Goshen, Indiana, three step sons, Christopher Leffert of Logansport, Indiana, Nicholas Leffert (Jamie) of Wichita Falls, Texas, and Scott Nelson (Chawndel) of West Bend, Wisconsin, nine grandchildren, Diana Taylor and Douglas Taylor of Florida, Billy Taylor (Lynn) of Idaho, Jennifer Butz of Georgia, Dean Leffert of Las Vegas, Nevada, Sawyer Leffert and Finn Leffert of Wichita Falls, Texas, and Rachel Nelson and Sarah Nelson of Wisconsin, four great grandchildren, Natasha, Tonya, Eric and Elliott, numerous nieces and nephews who loved him, Cheri’s siblings, Larry (Lois) Davis, Plymouth, Carol Leffert, Culver and their grandchildren, Trevor, Calhoun, Katie Penny and great-grandchildren, Hudson Calhoun. Also surviving is an ex-wife Carol Rode (Cathy) of West Bend, Wisconsin. Bill grew up in Mishawaka, Indiana and graduated from Mishawaka High School in 1949. He was active in track, basketball, and church activities at the old St. Peter’s Lutheran Church located next to Bonnie Doon’s in Mishawaka, of which he was a member. He graduated from DeVry Technical Institute in Downers Grove, Illinois, where he studied tool and die making. His schooling was interrupted when he was drafted into the U.S. Army during the Korean conflict between 1952-53. He trained at Fort Leonard Wood, Missouri and served in Co “B” Armored Medical Battalion at Camp Casey, Dongdocheon, South Korea, and was honorably discharged. Bill married Dorothy Jacobsen in 1954 and they moved to West Bend, Wisconsin, where they had three children. Dorothy passed away in an automobile accident in 1967. In West Bend he worked at the West Bend Company in the engineering department, and after that, he worked for Regal Ware, Kewaskum, Wisconsin as the manager of research and development. From 1975 until retirement in 1995, Bill was part owner in Arm Tool & Die, West Bend, Wisconsin. Bill was a member of Trinity Lutheran Church in Elkhart, Indiana. He has always been involved and a strong supporter of the Lutheran faith, first at St. Peter’s Lutheran Church in Mishawaka, Indiana, then St. John’s Evangelical Lutheran Church in West Bend, Wisconsin, and most recently at Trinity Evangelical Lutheran Church in Elkhart. Bill was an avid Green Bay Packers fan and he loved golfing and won several awards. He was also involved in boating and scuba diving for many years and loved the water. For many years the family would vacation in the Florida Keys, scuba diving and lobstering, exploring the wonders of the ocean and videotaping their excursions. He also loved diving in other places, like the Caribbean and the Grand Cayman Islands. He belonged to a diving club and would make ice dives in the winter at Green Lake in Wisconsin and also dives in the Great Lakes looking for artifacts. He was also a rescue diver for the sheriff’s department in Wisconsin. Other things Bill loved to do was to garden and deer and pheasant hunt. Bill was very mechanical from a very early age and would always be working and tinkering on something, trying to fix it rather than discard it. Everyone who knew him knew he never wanted to throw anything away that could be fixed! Words to describe Bill would be quiet, calm, his mother’s favorite son, stubborn, intelligent, a tease, loyal and faithful, devout, a tightwad, and funny with a dry sense of humor. He will be missed by many people, but none more than his loving wife of 10 years, Cheri. He was the love of her life and God truly brought them together under the most extraordinary of circumstances at His perfect timing, and Bill was totally devoted to her. Per his request his body has been donated to science. A memorial service will be held 11 am this Saturday, January 4, 2020 at St. John’s Evangelical Lutheran Church, 809 South 6th Ave., West Bend, Wisconsin, 53095. A local memorial service in Michiana will also be held 1 pm Saturday, January 11, 2020 at Trinity Lutheran Church, 30888 County Road 6, Elkhart, Indiana 46516. Memorial contributions can be made to Trinity Lutheran Church, 30888 County Road 6, Elkhart, Indiana 46516 or Center for Hospice, 22579 Old US 20 East, Elkhart, Indiana,46516 or St John’s Lutheran Church, 809 South 6th Ave., West Bend, Wisconsin, 53095. Rieth-Rohrer-Ehret-Lienhart Funeral Home, Wakarusa, is handling arrangements and online condolences may be sent at www.rrefh.com

William Richard &#8220;Bill&#8221; Butts passed away peacefully at his home in Elkhart, Indiana on Monday, December 30, 2019, with his wife Cheri at his side. He had been in declining health the past several years. Bill was born March 1,... View Obituary & Service Information

The family of William "Bill" Richard Butts created this Life Tributes page to make it easy to share your memories.

William Richard “Bill” Butts passed away peacefully at his home...

Send flowers to the Butts family.