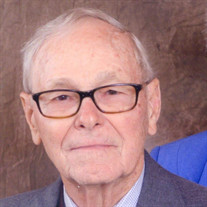 Wayne Schwalm Whitehead, 94, died at 1:40 a.m. Tuesday, December 8, 2020 at Waterford Crossing Assisted Living in Goshen. He was born on May 23, 1926 in New Paris to J Galen and Gleta (Schwalm) Whitehead. On November 19, 1949 married June (Cart) Whitehead in New Paris. Surviving are his wife, June, Goshen, 2 children, Stephen W Whitehead, Boulder, CO, Janell (Mike) Rink, Goshen, 2 granddaughters, Emily (Buck) Barton and Amanda (Alex) Barzycki, both of Goshen, great-grandchildren, Micah, Liberty and Brice Barton, Elizabeth and Samantha Barzycki and a sister, Doris Speicher, South Bend. Preceding him in death are his parents and a brother, William Dean Whitehead. Wayne lived in New Paris his whole life. He loved and deeply cared for his community. He graduated from New Paris High School in 1944. He was a Navy veteran. He worked as a mail carrier on trains and he transferred to the Goshen Post Office, then transferred and worked at the New Paris Post Office for more than 40 years. He was a member of the Grace United Methodist Church in New Paris. A past member of the New Paris Lions Club. He was a score keeper for New Paris and Fairfield High School basketball teams. He enjoyed helping others and visited many of his friends when they were in nursing care. He was an avid Green Bay Packer fan. Loved IU basketball and Notre Dame football. He never met a person he couldn’t strike a conversation with. His granddaughters and great grandchildren were the love of his life. Attending as many of their activities as he could before his stroke in 2015 made it too hard to do this. He was still able to give them big hugs. A celebration of life will be 12- 2 p.m. Saturday, May 22, 2021 at Grace United Methodist Church, 68407 Main St., New Paris. There will be a light lunch served and a time of fellowship with Wayne’s family. Burial was at New Paris Cemetery. Memorial donations may be directed to Grace United Methodist Church. Rieth-Rohrer-Ehret Funeral Home, Goshen, is handling arrangements and online condolences may be sent at www.rrefh.com

The family of Wayne Schwalm Whitehead created this Life Tributes page to make it easy to share your memories.

Send flowers to the Whitehead family.