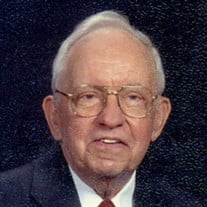 Dr. W. Lynn Bollinger, 90, of Goshen, IN, passed away at Greencroft Healthcare on Sunday, July 5, 2020. He was born on September 15, 1929, in LaGrange, IN, to the late Russell V. and Martha (Cripe) Bollinger. Lynn met his future wife, Grace W. Steele, in 1948 while they were both working at Camp Mack in Milford, IN. They were married on May 26,1950, in Walkerton, IN. They most recently celebrated their 70th wedding anniversary. Lynn was a faithful and dedicated educator after graduating from Manchester College in 1952 and continuing on to earn his Master’s and Ed.D. in Education from Indiana University. He worked in schools in Plymouth, Garrett, Jimtown in Elkhart, Northridge in Middlebury, and Goshen - all in Indiana. He was an Assistant Professor and Director of the Education Department at Indiana University in South Bend. Lynn helped many students pursue their educational dreams and goals. In his retirement, Lynn volunteered at Camp Mack. He was a mentor at Osolo Elementary School in Elkhart. He delivered Meals on Wheels for Elkhart General Hospital. He was a lifelong member of the Church of the Brethren and most recently at Creekside Church in Elkhart. His special interests included driving charter buses for Cardinal Bus Company, building fieldstone fireplaces for family and friends, and making 82 stained glass lamp shades and gifting them all to others. Lynn was respected and admired by many. His family was the central focus of his life. He was kind, dependable, and gave of his time and talents to anyone in need. He will be truly missed. Lynn is survived by his wife, Grace, and three daughters, Linda Rakow of Granger, IN; Marty (Larry) Humes of Bloomington, IN; Kathy (Mike) Butts of Columbia City, IN; and one son, Bill Bollinger of South Bend, IN; 7 grandchildren, 13 great grandchildren; several foster children; two sisters, Karen (Jerry) Hand and Christine (Stan) Beery, one brother, Wade Bollinger, and one sister-in-law, Carolyn Bollinger, all from North Manchester, IN. He was preceded in death by one son, Robert Bollinger, son-in-law, Rex Rakow, three sisters, Retha Bechtelheimer, Anita Cline, and Janet Crumley, and two brothers, Rex Bollinger and John Bollinger. There are no services planned at this time. Memorial contributions may be given to Camp Alexander Mack, 1113 E. Camp Mack Rd., Milford, IN 46542, or Creekside Church of the Brethren, 60455 C.R. 113, Elkhart, IN 46517. Arrangements are with Rieth-Rohrer-Ehret Funeral Home and online condolences may be sent at www.rrefh.com.

Dr. W. Lynn Bollinger, 90, of Goshen, IN, passed away at Greencroft Healthcare on Sunday, July 5, 2020. He was born on September 15, 1929, in LaGrange, IN, to the late Russell V. and Martha (Cripe) Bollinger. Lynn met his future wife, Grace... View Obituary & Service Information

The family of Dr. W. Lynn Bollinger created this Life Tributes page to make it easy to share your memories.

Send flowers to the Bollinger family.