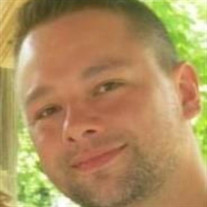 Travis Gene Staley, 43, Bloomington, formerly of Syracuse, died Sunday, August 2, 2020, at IU Health Bloomington Hospital. He was born April 23, 1977 in Goshen, to Richard B. & Shirley Jean (Rurak) Staley. Surviving are his parents, Richard & Shirley Staley, Syracuse, brother, Shane (Ann) Staley, Wakarusa, partner, Daniel Winter, Bloomington, nieces & nephews, Brittani & Logan Staley, Landry & Sophie Odiorne, aunt, Carolyn Pashea, Kentucky, cousin, Melissa Pashea, Kentucky and his best friend, Michelle Rogers and daughter, Ellie, who he raised as his own. Travis was most proud of his achievements in Stage Management. And as an Actor, Singer, Musician; also worked in the restaurant industry. He really enjoyed working and volunteering at BPP (Bloomington Playwrights Project). Through which he was published on Broadway. He was a beloved member of the stage management team of the IU Bloomington Theatre. Travis enjoyed nature, gardening, karaoke, and being a proud parent of their dog, Pepper. He enjoyed riding in his convertible Mustang, biking and was a successful runner. Most important to him were his family, his countless friends and especially his mom. A celebration of life will be 1-4 p.m. Sunday, August 23, 2020 at 15822 CR 50, Syracuse, Indiana 46567 (his parents’ residence). An additional celebration of life to be held at a later date in Bloomington. Rieth-Rohrer-Ehret Funeral Home, Goshen, is handling arrangements and online condolences may be sent at www.rrefh.com

The family of Travis Gene Staley created this Life Tributes page to make it easy to share your memories.

Send flowers to the Staley family.