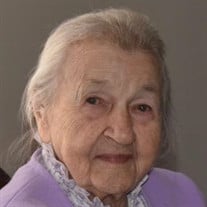 Thelma Mae Harley, 104, Goshen, died 11:55 a.m. Thursday, Nov. 21, 2019 at Greencroft Healthcare. She was born Oct. 28, 1915 in Honey Brook, Pennsylvania, to A. Martin & Martha (Rock) Wenger. On Nov. 28, 1935 in Telford, Pennsylvania, she married Paul Lockart Harley and he died Nov. 29, 2009. A life-long Christian, she is remembered by family and friends as a loving mother, Sunday school teacher and seamstress. She spent her days working in the home and singing hymns as she worked — undoubtedly a reason music holds such a strong place in the lives of her children and grandchildren. She grew up in eastern Pennsylvania, but moved to Goshen with her husband in July, 1985, to be close to family. Sometime after moving to Goshen she saw a pattern in the Goshen News for knitting baby caps and started to knit them for the newborns at Goshen General Hospital, something she continued the rest of her life. She and her husband developed new friends here in Goshen at North Goshen Mennonite Church and at Greencroft Retirement Community where they lived. She will be lovingly remembered by family and friends at a Memorial Service to be held at North Goshen Mennonite Church in Goshen on Saturday, January 18 at 4 pm. All those wishing to participate in the Memorial and reception following are invited to attend. There will be a visitation period before the service as well as afterward. Surviving are a daughter, Kathleen M. Aeschliman, Albany, Oregon, sons, P. David (Sylvia Baker) Harley, Baker, Nevada, John W. (Elaine) Harley, Goshen, 8 grandchildren, 17 great-grandchildren, 5 great-great-grandchildren and several step-grandchildren & step-great-grandchildren & step-great-great-grandchildren. Preceding her in death are her parents, husband, infant daughter, Marie & infant son, Timothy, 2 daughters-in-law, Sarah & Janet Harley, son-in-law, Merlin Aeschliman and siblings, J.C. Wenger, Warren Wenger, Herbert Wenger and Ruth Rosenberger. Online condolences may be sent at www.rrefh.com

The family of Thelma Mae Harley created this Life Tributes page to make it easy to share your memories.

Send flowers to the Harley family.