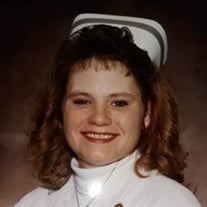 Tammy Renée (Johnson) McClish, 52, Mishawaka, died Tuesday, Sept. 3, 2019 at Center for Hospice Care, Elkhart. She was born February 18, 1967, in Elkhart, Indiana, to David Johnson and Kathy (Wainwright) Johnson. Tammy graduated from Goshen High School in 1985. She then became employed by Manchester Tank in Elkhart and later attended IvyTech Community College of Indiana where she graduated with an associate degree and an LPN License in nursing. Prior to attending nursing school, Tammy married Brian J. McClish and together they created and raised 6 beautiful children. Tammy is survived by her mother, Kathy Black, brothers, Todd Johnson and Craig Babcock, children, Brittany (Alissa) Wallace, Jerracka Sorgenfrei, Meagan McClish, Jarred McClish, Arianna McClish and Clayton McClish. She is also survived by two little grand babies, Axel McClish and Alexis Sorgenfrei, and by Kimberlee, Wendy and Jeff Black, sisters and brother by another mother. She also has her uncle Tom Wainwright and his wife Vicki, nephew Dusten Hurt and niece, Skylla Hurt. Along with several other nieces and nephews. There are also several cousins. Preceding her in death were her grandmothers, Betty King and Mable Gard. Also, her father, David Johnson and stepdad, Jeff Black Visitation will be 2-4 p.m. Friday, Sept. 6, 2019 with a celebration of life following at 4 p.m. all at Rieth-Rohrer-Ehret Funeral Home, 311 S. Main St., Goshen. Rev. Clint Keifer will officiate. Memorial donations may be given to the funeral home for expenses. Online condolences may be sent at www.rrefh.com The family also wants to recognize a very close friend of Tammy’s, Cami Boyer, Suzanne Rickey & Christina Ferguson, who has spent the last several days fighting for and caring for Tammy and making sure she was not in pain or suffering and ensuring Tammy had everything she needed.

The family of Tammy Renée McClish created this Life Tributes page to make it easy to share your memories.

Send flowers to the McClish family.