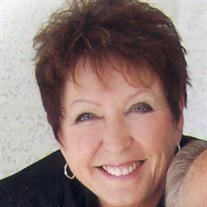 Mrs. Sydney L. Troyer, 77, Elkhart, died 2:45 a.m. Monday, December 14, 2020 at her home. She was born July 28, 1943 in Goshen, to Carol “Bud” & Charlotte “Lottie” (Tope) Bailey. On July 22, 1960, she married David Ray Troyer. Surviving are her husband, David Ray Troyer, Elkhart, son, Bruce David (Lupe) Troyer, Elkhart, 3 grandchildren, 5 great-grandchildren, brothers, Dennis (Jane) Bailey, Syracuse and Michael (Susan) Bailey, Oregon. Preceding her in death are her parents and a son, Brian R. Troyer. Sydney was a homemaker and happily married for 60 years. She loved to sew, was an avid runner, member of the YMCA and entertainer. A world traveler, she made many lifelong friends along the way. Sydney wintered in Las Vegas for 19-years and was a video poker expert. Sending cards for every occasion, she single handedly kept the U.S. Postal Services a float. She loved to dine out and always said her perfect home would not have a kitchen. Her contagious laughter was her hallmark. Private graveside services will be at Hess Cemetery. Rev. Lenny Krebs will officiate. In lieu of flowers, memorial donations may be directed to St. Joseph’s Indian School, P.O. Box 326, Chamberlin, SD 57326. Rieth-Rohrer-Ehret Funeral Home, Goshen, is handling arrangements and online condolences may be sent at www.rrefh.com

The family of Mrs. Sydney L. Troyer created this Life Tributes page to make it easy to share your memories.

Send flowers to the Troyer family.