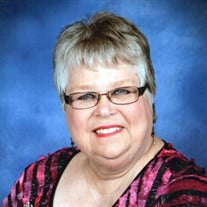 Rosanell (Rose) Husted was born May 10, 1943, and was adopted at birth by Charles and Gretchen (Hopp) Stavely. The first 11 years she resided on the Nebraska National Forest near Valentine, Nebraska. At age 11 her mother passed away and she then resided with the Claus and Helen Drews family on a ranch near Gregory, SD for 2 years. She then lived with another foster family, the Joe and Lena Owens family in Chadron, Nebraska. Later moving to Lakewood, Colorado, and graduated from high school there. She married her childhood sweetheart, Larry R. Husted on March 11, 1963. They lived on Grissom AFB near Peru, Indiana for all but 5 years of Larry’s 21 years of service. She lived in Huron, SD for one year while he served in Viet Nam and they were stationed in Tacoma, Washington for 4 years. After retirement, in 1983 they moved to Huron, SD. She was a house wife and mother of three. She sold Avon for over 30 years. And also worked as a florist for 8 years after moving to Huron. She was a 35 years member of BCNU Community and Family Extension Club, and served as president of her club for many years. She was also president of the Area IV for 3 years. She was honored with the President’s Award for outstanding service in 2012. She also was a volunteer and a life member of Huron Regional Medical Center Auxiliary. She was honored with the Volunteer of the Month and Volunteer of the Year during that time. She also was a member for Beadle County Bird Watchers and Huron Area Photo Club, and a Life Member of Huron Senior Center and a member of RSVP. She attended 1st United Methodist Church. Her life’s biggest accomplishment, was proudly donating 18 gallons of blood. Surviving are sons, Doug (Carrie) Nunnally, Cool, California, Tony (Vanessa) Husted, Mishawaka, Indiana, daughter, Brenda Powers (Keith Thomas), Middlebury, Indiana, grandchildren, Christian & Ian Nunnally, Karen (Nelson) Reese, Justin (Bailley) Maxwell, Brandi (Phil) Jakubowicz, Stephani (Brodi) Mast, Cody (Brooke) Powers, Chelsea (Josh) Fritts, Elsa Husted and Chloe Husted, 7 great-grandchildren, 6 foster sisters, 1 foster brother and all of her special friends. She was preceded in death by Charles and Gretchen Stavely, Foster parents, Claus and Helen Drews & Joe and Lena Owens, daughter, Cindy Maxwell and both sets of foster parents and 2 foster sisters. Three years ago, Rose decided to move from South Dakota back to Indiana in order to be closer to her grandchildren. Brenda and Rose also traveled the country in the RV taking copious amounts of trips in the motorhome. She thoroughly enjoyed seeing everyone that she cherished or held close in her heart. She was a fantastic great-grandmother and a wonderful grandmother to her multitude of grandchildren. She had a great impact on many and many on her, she will be dearly missed. She will also be missed by “her” dog, Willie. Rieth-Rohrer-Ehret Funeral Home, Goshen, is handling arrangements and online condolences may be sent at www.rrefh.com

Rosanell (Rose) Husted was born May 10, 1943, and was adopted at birth by Charles and Gretchen (Hopp) Stavely. The first 11 years she resided on the Nebraska National Forest near Valentine, Nebraska. At age 11 her mother passed away and she... View Obituary & Service Information

The family of Rosanell "Rose" Husted created this Life Tributes page to make it easy to share your memories.

Send flowers to the Husted family.