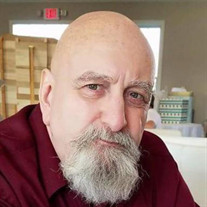 Ronald Wayne Johnson Sr.,70, of Mishawaka, died at 8:45 p.m. on Wednesday, October 13, 2021, at St. Joseph Regional Medical Center. He was born October 20, 1950, in Portland Indiana, to Raymond W. & Eleanor (Ruth) Johnson. On August 14, 1970, he married his high school sweetheart Janice Marie (Kearney) Johnson who passed away on December 26, 2010. Surviving are a son, Ronald (Becky) Johnson Jr., Osceola and grandchildren, Emmy, Lincoln & Porter Johnson. Preceding him in death are his parents, wife and sister, Sandra Baucher. Ronald and Janice settled in Topeka, Indiana where shortly after Ron became an employee at Supreme Corporation where he worked for 35+ years and was a plant supervisor. He loved woodworking and carpentry in general. He was an excellent cook & enjoyed making desserts from scratch. He enjoyed watching IU basketball, golfing and going to old car shows. He was always sure to read the latest John Grisham novel. Early in his life, he was very involved in his church; reading and studying Billy Graham and Charles Swindoll. Ronald loved spoiling his grandchildren and was famous for always being the “perfect gift giver”. His playful and sarcastic humor always brought a smile to those around him. An example would be, when asked how he was doing, Ron would always reply, “still looking down at the ground”. Our family is rejoiced in knowing that he is still looking down at the ground, now from the vantage point of our Heavenly Kingdom. Visitation will be 10 a.m.-1 p.m. Tuesday, October 19, 2021, with the funeral service following at 1 p.m., all at Rieth Rohrer Ehret Funeral Home, 311 S. Main St., Goshen. Pastor Ruben Chupp will officiate and burial will follow at Violett Cemetery. Online condolences may be sent at www.rrefh.com

The family of Ronald Wayne Johnson Sr. created this Life Tributes page to make it easy to share your memories.

Send flowers to the Johnson family.