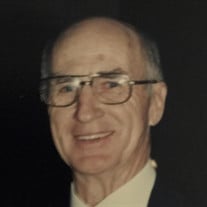 Richard “Dick” Eugene Lewallen was born February 27, 1922 at the home of his aunt and uncle Laura (Stull) and George Lewallen near Vayland South Dakota. The 11th of 13 children of J. Alverne and Amanda (Stull) Lewallen, he spent his youth in rural South Dakota and northern Indiana. He attended Scott High School, Scott, IN graduating from Concord High School, Dunlap, Indiana in 1940 after his family moved to the district for his senior year. Dick attended Daniel Baker College, Brownwood, Texas on a basketball scholarship until WWII ended the scholarship at which time he moved to South Dakota and began farming. Dick married Flossie Hasz in Huron, SD on October 23, 1943. Together they farmed and taught in one-room rural schools in South Dakota until 1946 when he opened Lewallen Brothers Hardware in Alpena, SD with his brother Mike. Dick was also an auctioneer and he returned to farming after leaving the hardware store. In the mid-1950’s he moved his family to Webster, SD then to Indiana as a special agent with American Insurance Company, Indianapolis. Later he worked in electrical sales, the mobile home and rubber manufacturing industries after settling in Goshen in 1960. He retired in 1984 from Johnson Controls. Dick became a Freemason in 1971, remaining a member of Tyrian Lodge No. 12, Goshen, until his death. On February 12, 1994 in Wessington Springs, SD he married Luella (Krueger) Hansen. Making their home in Wessington Springs they enjoyed rich lives, active with Wessington Springs Country Club, Our Saviour’s Lutheran Church, delivering Meals on Wheels and enjoying time with family and friends near and far. Naturally athletic, he was playing baseball and softball well into adulthood. An avid golfer, he accumulated 3 holes in one. An outdoorsman who hunted and fished into his early 90’s he continued playing cards at the Senior Center after he moved to Weskota Apartments in 2015, and in 2016 to Weskota Manor. He loved to sing, whistle, was a published poet, a gardner, beekeeper and woodworker. Helping family and friends brought him great joy, be it mowing a lawn, blowing snow, fixing a youngster’s bicycle or grilling his special chicken recipe. Dick took great pride in being part of a medical trial beginning in 2001 with Dr. Prema Abraham, BHREI, from which the drug Lucentis® received approval from the FDA for use in treating wet macular degeneration. His care under Dr. Abraham continued into 2020 and allowed him to retain vision in his treated eye throughout his lifetime. Dick was preceded in death by his parents, his wife Flossie in June, 1993, his son David, April, 1989, his wife Luella (Hansen) Lewallen, December, 2018. He was also preceded by brothers Oliver, Earl, Forrest, Alverne (Mike), Howard and sisters Beatrice, Violet (Koch) King, Mildred Rassi, Gladys (Berlin) Raines, Lillian McGibbney, Margaret (Snyder) Barlament, Catherine Huys and stepgrandsons, Craig Kilmer and Shawn Kilmer. He is survived by his daughter Deborah (Gary) Kilmer, Goshen, IN; stepchildren, Carol (Doug) Jones, Alpena, SD, Kay (Dana) Dahlquist. Sioux Falls, SD; Neil Hansen, Sioux Falls as well as five step grandchildren, 14 step great grandchildren and one sister-in-law, Eldora Hasz, Wessington Springs, SD. Cremation has taken place under the direction of Basham Funeral Home. Private family burial in Violett Cemetery, Goshen, IN will be held at a future date under the direction of Rieth-Rohrer-Ehret Funeral Home with Joel DeSelm, Interim Pastor, West Goshen Church of the Brethren officiating. His Celebration of Life will be held virtually at a future date from Our Savior’s Lutheran Church, Wessington Springs, SD with Pastor John Paulson officiating. Details will be updated to the funeral home website when available. Memorial contributions may be directed to Weskota Foundation, 604 First Street NE, Wessington Springs, SD 57382 or Wessington Springs Area Community Foundation, P. O. Box 157, Wessington Springs, SD 57382. RICHARD LEWALLEN MEMORIAL SERVICE The memorial service for Richard Lewallen is being recorded and will play as a “premier” on YouTube at 4:00 p.m. Central STANDARD time on Sunday, Nov. 1. (Remember to set your clocks back Saturday night!) Check back here for the link about an hour before. You do not have to have a Facebook account to view this. If you are on Facebook, however, a link to the service will also be posted there Sunday afternoon by 4:00. The recording will available after that time as well. https://www.youtube.com/watch?v=WDnlnbstOYg

Richard &#8220;Dick&#8221; Eugene Lewallen was born February 27, 1922 at the home of his aunt and uncle Laura (Stull) and George Lewallen near Vayland South Dakota. The 11th of 13 children of J. Alverne and Amanda (Stull) Lewallen, he spent... View Obituary & Service Information

The family of Richard "Dick" Eugene Lewallen created this Life Tributes page to make it easy to share your memories.

Send flowers to the Lewallen family.