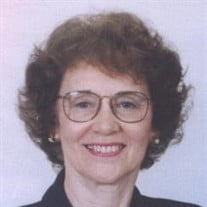 Retha Jean Moran, Elkhart, was born August 1, 1935, in Lee City, Kentucky to Osa and Rena Patrick. She married John P. Moran on June 6, 1959 and he died Oct. 15, 2013. Retha entered heaven on December 21, 2019. Surviving are her children John (Maira) Moran II of Fort Wayne, Indiana, James (Josephine) Moran of Lima, OH, and Helen (Daniel) Travis of Marshall, Michigan, nine grandchildren and nine great grandchildren and her sister Helen Hill of Rutherford, Tennessee. After graduation from Mount Carmel High School in 1953, Retha enrolled in the Kentucky Mountain Bible Institute. Later she attended and graduated from Bethel College, Mishawaka, Indiana, in 1959 with a Bachelor of Science Degree in Education. Retha’s joy and ministry was being a pastor’s wife, a teacher, mother, grandmother and great grandmother. Retha and John served as missionaries in Nigeria, West Africa four years where she taught women reading, math and basic health at the Salka Bible School. She was also an elementary school teacher in Manchester, Indiana and Marshall, Michigan. Her career path later led her to manage the Bethel Bookstore in Elkhart, Indiana, where she served as store clerk, and then store manager, then was promoted to store manager over two Bethel bookstores. She also served as Director of the Missionary Church Women’s Ministries of North Central District for four years. When John became president of the Missionary Church, Retha served alongside him as First Lady for fourteen years. Following John’s retirement, she continued to support John as he served as pastor at various missionary churches, one being the New Paris Missionary Church. She was always a gracious hostess and planner of various events all throughout the years, making people feel special. In recent years, while living at Hubbard Hill Retirement Community, Retha served as Director of Senior Adults of the North Central District of the Missionary Church. There was never any doubt that Retha’s relationship with her heavenly Father was foremost in her life. From that humble devotion, her love for John was always spoken of with great respect and how God had blessed their lives together. Retha shared frequently about her children, grandchildren and great grand children. She prayed daily for them and shared how thankful she was for each one of them. Her loving and humble heart was filled with encouragement that touched the lives of not only her family, but all those who knew her in ministry and friendship. She set a Godly example throughout her life, and showed us how to look forward to heaven, which is now her eternal home. Visitation will be 1-3 & 5-7 p.m. Friday, Dec. 27, 2019 at Rieth-Rohrer-Ehret Funeral Home, 311 S. Main St., Goshen. Funeral services will be 11 a.m. Saturday, Dec. 28, 2019, at Hubbard Hill Estates, 28070 CR 24, Elkhart. Pastor David Hackney, Pastor Tim Henke and Pastor Matt Schoettle will officiate. Burial will follow at South Union Cemetery. Memorial donations may be directed to World Partners. Online condolences may be sent at www.rrefh.com

The family of Retha Jean Moran created this Life Tributes page to make it easy to share your memories.

Send flowers to the Moran family.