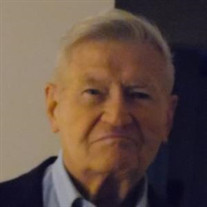 Ranard (Jack) Jackson Pickering, age 89, of Arlington, Virginia, passed away on October 29, 2018. He was 89 and is survived by his three children- Pamela, of Whidbey Island, WA; Nancy, of Alexandria, VA; Michael, presently of Centreville, VA; and his sister, Carolyn Garman of Cincinnati, Ohio. Joyce H., his beloved wife of more than 50 years, passed before him, in 2005. Jack was born in Goshen, Indiana, and later attended Indiana University from which he received a BA (Suma Cum Laude) and a Masters, both in geology. While at IU, he met and married Joyce Holt. Their first daughter, Pamela, was born while Jack and Joyce were still attending IU. Jack worked as a geologist for The New Jersey Zinc Co. while they lived in Ogdensburg, New Jersey, where his second daughter, Nancy, was born. After they moved to Provo, Utah, he worked for U.S. Steele, and his son Michael was born. After moving to Mountain View, California, Jack attended Stanford University, earned a Doctorate degree in Geology, and stayed on to do a year of research as a National Science Foundation Postdoctoral Fellow. When Jack was employed by the U.S. Geological Survey to work in various field offices, the family moved: first to Oak Ridge, Tennessee; next to Columbus, Ohio; and finally, to the Survey’s National Headquarters in the Washington, D.C. area. He soon became Chief of the Quality of Water Branch, and was then appointed Chief of the newly created Office of Atmospheric Deposition Analysis (Acid Rain). Jack had been in the Senior Executive Service and had received two Service awards, had published numerous technical papers, was a Fellow of the Geological Society of America, and was a member in several prestigious Scientific Societies. After 33 years, he retired from the Survey. Music had been a big part of growing up in the Pickering family home. Like his siblings, Jack played multiple instruments. He sang all his life, and after retiring, Jack even sang in three different groups at the same time. In addition to singing in the choir, Jack was quite active in his church- he counted the offerings, coordinated with the piano tuner, and worked as one of the gardeners. After Jack was invited to Vienna, Austria to deliver a paper, and Joyce was able to go with him, they began to travel extensively. After a few trips to San Francisco, they bought their 27.7’ Bristol sailboat. They loved sailing, and for 25 years almost every weekend was spent on their sailboat- until Alex and Ben, Michael’s boys, were born and became their most important focus. Jack donated the sailboat after Joyce passed away. A Memorial Service was held at Church of the Covenant, 2666 Military Rd., in Arlington, VA. A graveside memorial service will be held June 8, at 3 p.m. at the Whitehead Cemetery in Elkhart County, Indiana. Rieth-Rohrer-Ehret Funeral Home, Goshen, is assisting with arrangements and online condolences may be sent at www.rrefh.com

Ranard (Jack) Jackson Pickering, age 89, of Arlington, Virginia, passed away on October 29, 2018. He was 89 and is survived by his three children- Pamela, of Whidbey Island, WA; Nancy, of Alexandria, VA; Michael, presently of Centreville, VA;... View Obituary & Service Information

The family of Ranard "Jack" Jackson Pickering created this Life Tributes page to make it easy to share your memories.

Send flowers to the Pickering family.