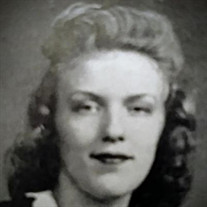 Phyllis Ida Owens, formerly of Goshen, 94, died Friday, September 24, 2021, at Miller’s Merry Manor in Warsaw, where she had been a resident for nearly a decade. Born August 1, 1927, in Goshen, Indiana to Carl and Freida (Strycker) Rheinheimer, she was a member of the Goshen High School Class of 1945 and later that year married fellow classmate Russell Owens, whom she shared four children with. Phyllis was a longtime operator for General Telephone Equipment (GTE), Elkhart, as well as a member of the Goshen City Church of The Brethren. Later in life she was involved in the auction scene in Ligonier and frequented Peddler’s Village Flea Market. She was a resident of Lakeland Rehabilitation, Milford, and Miller’s Merry Manor, Warsaw, where she was affectionally called “Granny O” by residents and staff, who were an extension of her family for nearly twenty years. As a teenager, she said she wanted to fly and, to her family, this ambition lived in her creativity, her eclecticism and her defiance of convention. She certainly travelled, but she also saw the world in a unique way – letting her imagination soar, too. She will be remembered by her children; Jessica (Bobby) Rias, Goshen; Jeffrey (Vicky) Owens, Warsaw; Jennifer (Tripp) Starnes, Naples, Florida; and daughter-in-law Mary (Michael) Owens, Laguna, California; as well as 12 grandchildren and 26 great- and great-great grandchildren. Preceding her in death are her parents; brothers, Carl Rheinheimer Jr, Tommy Rheinheimer; her sister-in-law Sanita Rheinheimer; and her eldest son Michael Owens. Visitation will be Tuesday, September 28, 2021 from 4-7pm at Rieth Rohrer Ehret Funeral Home, Goshen. A graveside funeral service will be held on Wednesday, September 29, 2021, at 9 am at Violett Cemetery, Goshen. Rieth Rohrer Ehret Funeral Home, Goshen, is handling arrangements and online condolences may be left at rrefh.com. Memorial donations may be directed to Lake City Animal Health & Wellness with designation to The Cat House.

Phyllis Ida Owens, formerly of Goshen, 94, died Friday, September 24, 2021, at Miller&#8217;s Merry Manor in Warsaw, where she had been a resident for nearly a decade. Born August 1, 1927, in Goshen, Indiana to Carl and Freida (Strycker) Rheinheimer,... View Obituary & Service Information

The family of Phyllis Ida Owens created this Life Tributes page to make it easy to share your memories.

Send flowers to the Owens family.