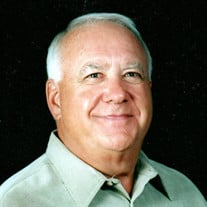 Phillip Eugene Hoffman passed away peacefully on February 1, 2021 to meet Our Lord. Born October 9, 1938 in Millersburg, Indiana, he was preceded in death by his parents, George and Rhumain Hoffman, as well as all of his siblings, Robert, Richard, Raymond (Theda), Virginia Lebold (Leonard) and Joan Culver (Curtis) plus two nephews, Mark and John Riffe and niece, Vicki Christensen (David). Phillip is survived by his loving wife and best friend, Elaine, five children, Phillip, Dennis, Kim Hogan, James (Dana) and Timothy (Denise) and also two step-children, Allen Begley and Donna Fischman. He has 13 grandchildren, Mike, Bethany, Robert Hoffman, Johanna Hogan, Skye Hoffman (R.J.), Holly Reagan (Devin), Theodore Hoffman, Hailey and Preston Hoffman, Danielle, Garrett Begley and 4 great-grandchildren, Johnathan and Stephen Hoffman, John Murphy and Molly Reagan. Nephews are Mike Hoffman (Betsy), Richard Hoffman (Marcia), Jeff Lebold, Rick Lebold (Lisa), and George Rife. Nieces are Sue Nash (Jim), Cindi Hoffman, Robin Sizemore (Dan) and Connie Croasdall (Richard). Phillip and Elaine were married in California in 1984 and they resided there until returning to Indiana in 2012. He was known as “Phil” west of the Mississippi and known as “Butch” east of the river. It took Elaine a while to figure out who “Butch” was. He graduated from Washington-Clay High School in South Bend in 1957. He participated for 4 years in Football, Basketball and Track and was named most valuable in Football in 1956. He then attended Ball State from 1957¬-1959 and was in the Indiana Army National Guard from 1957-1961 attaining the rank of Sergeant. His family owned the South Bend Livestock auction barn on Grape Road from 1945-1959. He worked in the mobile home and RV industries for 25 years in purchasing. StarCraft Corporation transferred him to California in 1981. He retired in 1998 while working for Crescent Truck Lines in California after 15 years in sales. Phillip was a member of the Richard Hoffman American Legion Post #484 in Millersburg, IN. The Post was named after his brother who was KIA June 11, 1944 in Normandy, France. In his birth town of Millersburg, he had planted 18 trees in honor of his family at Cook Park. They are all well and thriving. He will always be remembered for his deep voice and joyful laugh. He enjoyed life, keeping in touch with friends, playing Euchre and of course, watching his beloved Irish. A graveside service will be held at Brown Cemetery near Millersburg, IN, on Friday, February 5, 2021 at 1 p.m. In lieu of flowers, the family would prefer gifts to Heart to Heart Hospice, 620 Edison Road, Suite 122, Mishawaka, IN 46545 Rieth-Rohrer-Ehret Funeral Home, Goshen, is handling arrangements and online condolences may be sent at www.rrefh.com

Phillip Eugene Hoffman passed away peacefully on February 1, 2021 to meet Our Lord. Born October 9, 1938 in Millersburg, Indiana, he was preceded in death by his parents, George and Rhumain Hoffman, as well as all of his siblings, Robert, Richard,... View Obituary & Service Information

The family of Phillip Eugene Hoffman created this Life Tributes page to make it easy to share your memories.

Send flowers to the Hoffman family.