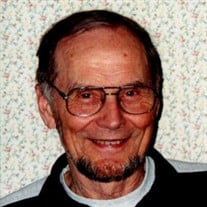 Orie O. Schrock, of Goshen Indiana, passed away Oct. 1, 2021, at the age of 97. A Memorial Service will be held Wednesday Oct. 6 at 4:30 PM at East Goshen Mennonite Church, 2019 E. Lincoln Ave, Goshen, IN 46528. The service may be viewed at the following link. https://tinyurl.com/OrieSchrockService Friends are invited to visit with the family from 3 - 4:30 pm before the service. The family requests masks be worn. Orie was born April 15, 1924, at Goshen, IN to Tobe and Mattie (Miller) Schrock. In the Spring of 1931, the family moved to Clarksville, MI. Orie grew up working on the farm with his family. He was drafted in 1945 and went to CPS at Medaryville, IN. After his service he returned home to the farm. In 1948 Orie moved to Cass Lake, MN. He was caretaker at Steamboat Lake Resort. He also taught and preached at various mission churches in Ogema, Loman and Mahnoman areas. He met his first wife, Ruth Stoll, and they were married at Loman, Dec. 20, 1950. Orie became ordained in 1952 at Strawberry Lake Mennonite Church. After living in the Loman area, they moved to Red Lake, Ontario, Canada. They helped in mission work and Orie also worked at the Madsen Gold Mine. Their four children were born while living there. In 1963, Orie and family moved back to Clarksville, MI where he pastored at Bowne Mennonite Church. In 1969 they moved to Grand Rapids, MI and started the North Park Mennonite Church. Orie drove dump truck for a living. In 1975 Orie and family moved to Pennsylvania where he pastored at Hersteins Mennonite Church in Schwenksville. In 1979 Orie and family moved to Minnesota where he pastored at Leader Mennonite Church. They lived in Staples, Motley and Leader areas for many years. He worked for various farmers and hauled mail out to Motley for 8 years. Every summer he was a counselor at Sand Hill Bile Camp at Fosston, MN where the kids enjoyed “Orie’s Stories”. They also never did find his secret hiding place during the annual “Hide and Seek” game. Also, for many years Orie dressed up as Abe Lincoln and gave the “Gettysburg Address” at different functions and schools. Orie was caregiver to Ruth for many years due to her stroke. In 2001 Ruth passed away. Orie moved back to Goshen, IN where he married Miriam Graber on Oct. 12, 2002. Orie worked at World Missionary Press in New Paris, IN until he retired at nearly age 91 in January 2015. Orie loved and served God throughout his life and wanted to help spread the Gospel of Christ throughout the world. He was a great encourager and urged to always “look for something to do and then do it”, and always stay busy. Orie attended school through 8th grade when he was needed on the farm. It was a great disappointment to Orie that he couldn’t finish school and contributed greatly to his feelings of inferiority through his adult life. So it was a great accomplishment when he was able to get his GED in 1995 at the age of 71. His family celebrated with him. Orie leaves behind him his wife, Miriam, his children, Alan (Pat Keener) of Moorhead, MN, Anna (Dan Pipek) of Staples, MN, Susan (Curt Martin) of Pillager, MN, and Marlin (Cathy Cole) of Waverly, NY. His stepchildren John (Crissie Musselman) Graber of Goshen, IN, Merlin Graber, Goshen, IN, Millard (Sheila Koch) Graber, Goshen, IN, Carol (Bill Frisbie), Goshen, IN and Galen (Ruth Brenneman) Graber, Wellman, IA, ten grandchildren, fourteen step grandchildren, nine great grandchildren, fourteen step great grandchildren, brother Edward of Clarksville, MI and sister Martha (Virgil) Albrecht of Three Rivers, MI. He was preceded in death by his first wife, Ruth, great grandson James Martin, step granddaughter Joyce Graber, step great grandson Joshua Angel, brother Oscar, sisters Mae Wenger, Mary Birkey and baby sister Esther. Memorial Contributions can be sent to World Missionary Press, P.O. Box 120, New Paris, Indiana 46553-0120 Arrangements are with Rieth Rohrer & Ehret Funeral Home and online condolences can be submitted at www.rrefh.com https://tinyurl.com/OrieSchrockService

The family of Orie O. Schrock created this Life Tributes page to make it easy to share your memories.

Send flowers to the Schrock family.