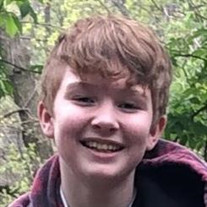 Malachi Deacon James Southern, 12, Goshen, died 3:02 p.m. Monday, June 17, 2019 at Memorial Hospital of South Bend. He was born Sept. 18, 2006 in Elkhart. Malachi donated his organs to save the lives of 3 adults. He was the first child ever to have the honor walk at South Bend Memorial Hospital. Surviving are his mother, Melissa (Esch) Southern, Goshen, father, Joshua Southern, Goshen, grandparents, Renee Esch, Goshen, Thomas Esch, Elkhart, Tatiana Schue, Goshen, great-grandparents, Judy Minnich, Goshen, and Rosika Mahony, Goshen. Preceding him in death are a great-grandfather, R. Herbert Minnich and grandpa, Kevin Southern. Malachi was to be a 7th grader at Goshen Middle School and was a part of the band in percussions. He attended the Boys & Girls Club, Goshen and Bristol United Methodist Church. Malachi loved being outdoors, playing with his friends, from swimming to jumping on the trampoline. He was a great pitcher and played soccer. He enjoyed video games, comic books and superheros. Malachi was very passionate about wanting to be an engineer, even going as far as making his dad a calculator out of Legos that worked. He loved making people laugh, telling jokes, and pulling pranks. Visitation will be 3-8 p.m. Monday, June 24, 2019 and one hour prior to the 11 a.m. service on Tuesday, June 25, 2019, all at Rieth-Rohrer-Ehret Funeral Home, 311 S. Main St., Goshen. Pastor Gary Lewis will officiate. Burial will follow at Elkhart Prairie Cemetery. Memorial donations may be directed to the funeral home for expenses, Beacon Children’s Hospital, 615 N. Michigan St., South Bend, IN 46601 or Indiana Donor Network, 3760 Guion Road, Indianapolis, IN 46222. Online condolences may be sent at www.rrefh.com

Malachi Deacon James Southern, 12, Goshen, died 3:02 p.m. Monday, June 17, 2019 at Memorial Hospital of South Bend. He was born Sept. 18, 2006 in Elkhart. Malachi donated his organs to save the lives of 3 adults. He was the first child ever... View Obituary & Service Information

The family of Malachi Deacon James Southern created this Life Tributes page to make it easy to share your memories.

Send flowers to the Southern family.