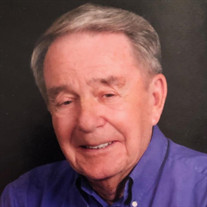 Lloyd Earl Balsley, 90 of North Fort Myers, FL and formerly of Elkhart, died Wednesday, June 24, 2020 at Lee Memorial Health System, Fort Myers. He was born on October 25, 1929 in Walkerton, to Lowell and Lois Balsley. On March 13, 1971 he married Wanda (Hartman) Balsley, she survives. He is also survived by a son, Brian (Janna) Balsley of Cape Coral, FL, grandchildren, Brock Balsley, Gavin Balsley, siblings, Richard Ritchie, Gordon Balsley, niece, Christine (Tingley) Smith, nephews, Ric Tingley-Brown, and Matthew Charles Bowen. He was preceded in death by parents, 2 sisters, Louise Tingley, Sue Brown, brother-in-law, Robert Tingley and nephew, Scott Tingley. Lloyd was a veteran of the United States Army and a manager for an industrial towel service company. He was a member of Yellow Creek Mennonite Church. He was also an avid fan of the University of Notre Dame and its athletics and was an usher for football, basketball, and hockey games during his retirement for several years. He also enjoyed boating and camping and had visited numerous national parks and campgrounds across the United States. Memorial contributions are designated for the Yellow Creek Building Fund, 64901 County Road 11, Goshen, IN 46526. A memorial service will be held at a later date. Rieth-Rohrer-Ehret Funeral Home, Goshen is in charge of arrangements and online condolences may be submitted at www.rrefh.com

The family of Lloyd Earl Balsley created this Life Tributes page to make it easy to share your memories.

Send flowers to the Balsley family.