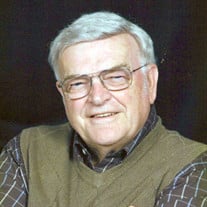 Larry Blackport, 86, Goshen, died at 9:45 a.m. Friday, March 11, 2022 at his home. He was born February 25, 1936 in Goshen, to Herman & Katherine (Rush) Blackport. In May of 1954, he married Sharol Jane (Tarman) Blackport and she died August 14, 2021. Surviving are daughters, Tami (Nick) DeLucenay, Bristol, Teresa Vining, Goshen, Tracy (David) August, Goshen, Megan (Michael) Howey, Holland, Michigan, 13 grandchildren, 9 great grandchildren, sister-in-law, Judy (Dennis) Sensenich, Millersburg, niece, Angie Kulczar of Millersburg and extended family Jeff and Jason Yonker and their families, Michigan. Preceding him in death are his parents, wife, Sharol, brother Doug, son-in-law, Lynn Vining, and niece Candi Bailey. Our dad had spent a lifetime working with and for people. He grew up in East Goshen and graduated from Goshen High School in 1954. His first job was working with his dad delivering vegetables grown on their farm to small grocery stores in the area. The family then owned and operated Blackport TV & Appliance Store. After the store closed, he received his certification as a water quality specialist and continued his passion of sales and marketing in the water conditioning business. He believed that customer service should always come before a sale. After retiring from the water conditioning business, he continued to work in sales and marketing at Jellystone Campgrounds in Pierceton, IN where he also served as President of the Board of Directors. A civic and community leader for more than 50 years, our dad served to make Goshen a great place to live. He said in an interview “if you are active in politics, you find out that the system does work. I don’t think you can really appreciate government until you get involved.” His accomplishments in government include: Civil Defense Director with special service in disaster response, City and County Councilman at Large, served on the Alcohol Beverage Commission, President of the Elkhart Township Trustee Board, along with serving many roles with the Elkhart Exchange Club, LifePoint Church, and President of the Pachyderm club. He also served his country in the National Guard and received special recognition as a sharp shooter. Larry enjoyed traveling, camping, desserts, cars and car races. His hilarious sense of humor brought many smiles and laughter to all. His greatest joy was spending time with his wife, children and grandchildren and loving Jesus with all his heart. Visitation will be 12:30-2:30 p.m. Saturday, March 19, 2022, with the service following at 2:30 p.m. all at LifePoint Church, 1006 S. 16th St., Goshen. Pastor Anthony Cottrell and Pastor Troy Scott will officiate. Burial with military honors will be at New Paris Cemetery. Rieth Rohrer Ehret Funeral Home, Goshen, is handling arrangements and online condolences may be sent at www.rrefh.com Memorials may be sent to Child and Parent Services, (C.A.P.S) of Elkhart County, Goshen Hospice, or donor's choice.

The family of Larry Blackport created this Life Tributes page to make it easy to share your memories.

Send flowers to the Blackport family.