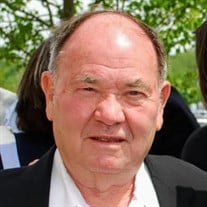 Kenneth L. Farrier, Goshen, passed away on Thursday, January 14th at the age of 85 after an 8-year battle with Parkinson’s disease. Kenny was born on May 8, 1935 in Washington, Iowa to Orval and Dora Mae (Hesseltine) Farrier. Kenny graduated from Brighton High School in Brighton, Iowa and worked on the railroad while attending school. After high school, he moved to Elkhart, Indiana, where he worked for Garman Brothers Lumbar Company for 14 years before working in various roles within the RV industry for another 32 years. Kenny married Mildred (Millie) Foos on December 28, 1968 and for 52 years he loved her, and she him. Together they raised 6 children – Rebecca D. (Gregory) Coppens, Rita D. (Bruce) Earley, Robert D. Farrier, Ronald D. Farrier, Valarie L. Mann and Andrea M. (Michael) Johnson. Kenny was a man of honesty, decency, hard work, respect and wit. Like many from his generation, he knew how to do a little bit of everything, or as he would say, “just enough to get into trouble”, and he could almost always figure out how to make something work. Kenny always did what was right, even when it wasn’t easy, such as raising two grandchildren, along with Millie, from the ages of 3 and 1. He was also a man of simple tastes and pleasures – he was a long-time league bowler, played in a country music band, enjoyed fishing, farming, mushroom hunting with his son, Rob, tinkering around the house and garage, and taking Millie “out on the town” for live music and dancing (he was known for his dance skills) at the Goshen Moose Lodge or the VFW, or, as they got a little older, up to “Tony’s” for coffee and a bite to eat. When asked what he wanted for his birthday or Christmas, he would often say, “just bring yourself” or “just a smile”, and you could always count on hearing him say “be careful” when you’d leave the house. Kenny had witty responses for every situation and made an impression on everyone he encountered. He truly lived by the mantra of “treat others the way you wish to be treated.” Kenny had many titles in his lifetime – son, brother, uncle, friend, father, grandfather, and husband, but he came to be known to his whole family as simply, “Grandpa.” He taught kids how to drive stick shifts, mow yards, and take care of what you have; he helped with school projects and he was the one that kids would fight over who got to sit on his lap. Kenny was always grateful for what he had, and there was nothing that he was more grateful for than his family – it was the single most important thing to him, and no one has been more important to us, than him. He would always take time to help us, or anyone, no matter the time or the need. His impact on all of us, and the void he leaves behind, is immeasurable and will be felt for as long as we remain. He is our hero in every way. Kenneth was preceded in death by his parents, his sister, Evelyn (Kenny) Hahn, and his two sons, Robert and Ronnie Farrier. He is survived by his beloved family: his wife, Millie, 4 daughters – Rebecca D. (Greg) Coppens, Rita D. (Bruce) Earley, Valarie L. Mann, and Andrea M. (Michael) Johnson; 14 grandchildren – Adam Coppens, Kenneth David Coppens, Lance Earley, Dawn Farrier, Linnette Farrier, Jeffrey Norment, Matthew Norment, Wyatt Mann, Sydney Mann, Amanda Qualls, Joseph Haskins, Sorin Johnson, Nick Johnson, and Adam Johnson; and 19 great-grandchildren, all with loving memories that they will carry with them forever. Memorial contributions may be made to St. Jude’s Children’s Hospital. Rieth-Rohrer-Ehret Funeral Home, Goshen, is handling arrangements and online condolences may be sent at www.rrefh.com

Kenneth L. Farrier, Goshen, passed away on Thursday, January 14th at the age of 85 after an 8-year battle with Parkinson&#8217;s disease. Kenny was born on May 8, 1935 in Washington, Iowa to Orval and Dora Mae (Hesseltine) Farrier. Kenny... View Obituary & Service Information

The family of Kenneth L. Farrier created this Life Tributes page to make it easy to share your memories.

Send flowers to the Farrier family.