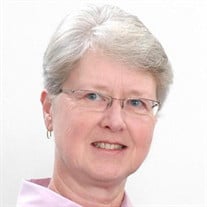 Judy A. Witmer, 73, Wakarusa, met Jesus face to face, Tuesday, August 25, 2020 after a long battle with Alzheimer’s. She was born April 8, 1947, in Elkhart, Indiana, to Rev. Robert F. and Joan (Rohrer) McBrier. On August 16, 1969, she married Richard Witmer in New Paris, Indiana. Surviving are her husband, Richard “Rich”, Wakarusa, son, Ryan, Miami, Florida, daughter, Renee (Dan) Bridges, Mishawaka, granddaughters, Melanie and Allie Bridges, brother, Dennis (Doris) McBrier, Albion, and a sister, Karen (Steve) Stickel, Goshen. Preceding her in death are her parents and a sister, Nancy McBrier. Judy was a 1965 graduate of Lakeville High School and a 1969 graduate of Goshen College with a Nursing Degree. She was employed as a registered nurse at Elkhart General Hospital and Veterans Memorial Hospital, Waukon, Iowa. She served 33 years with World Partners as a missionary in Brazil and Bulgaria. She was a member of Wakarusa Missionary Church. Visitation will be 4-7 p.m. Friday, August 28, 2020 and one hour prior to the 1:30 p.m. funeral service on Saturday, August 29, 2020, all at Wakarusa Missionary Church, 202 W. Waterford St., Wakarusa. Rev. Chris Knight and Rev. Dave Mann will officiate. The service will be live streamed through YouTube. Burial will follow in Olive (West) Cemetery. In lieu of flowers, memorial donations may be directed to World Partners, Fort Wayne, Indiana. Rieth-Rohrer-Ehret-Lienhart Funeral Home, Wakarusa, is handling arrangements and online condolences may be sent at www.rrefh.com

The family of Judy A. Witmer created this Life Tributes page to make it easy to share your memories.

Send flowers to the Witmer family.