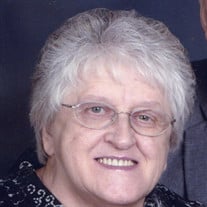 Judith “Judy” Kniesly (née Gunterman), 77, Goshen, was surrounded by those who she loved most fiercely when she was welcomed into the Lord’s arms on September 3, 2019. Judy’s life was spent as a servant leader to those around her. Whether she was caring for her husband, Carl; seeking and sharing special recipes, books, newspaper clippings, heirlooms, baked goods, or letters with her family and friends; or fostering a thoughtful, charitable relationship with her local church and community, Judy brought delight and dedication to all that she held dear. It is impossible to properly capture the depth and breadth of her generous influence on those around her—all of those she treasured were made wiser, kinder, and more selfless because of the tenderness she showed them. A lifelong resident of Northern Indiana, Judy was born September 27, 1941, in Mishawaka to John and Clara (Drew) and attended Bremen Senior High School. She enjoyed her childhood with niece, Barb (Jay) Stouder, and nephew, Mike Walters, who were like siblings. She worked in housekeeping at Goshen Hospital for 16 years. In later years, Judy and Carl made beautiful handmade candles as Kountry Kraft Kandles before their retirement when she then engaged in custodial work at local churches. She was a member of New Paris Missionary Church. With her first husband, Eldon Roth, she welcomed two daughters, Deborah (Charles) Hudson, Westfield, and Shirley Shapland, Elkhart. Upon marrying Carl Kniesly on May 29, 1964, the family grew with stepsons Kenneth (Rikki), Elkhart, and Keith (Carol), Florida, and later with the births of Kevin (Teresa), Logansport, and John (Marla), Elkhart. Judy celebrated 55 years of marriage with Carl this year. She was the wonderful grandmother of 17 grandchildren and 26 great-grandchildren with whom she made precious memories at county fairs, during family events, in the candle shop, in the garden or yard feeding chickens and collecting eggs, and more. Preceding her in death are her parents; stepmother, Edna (Zeiger) Gunterman; brother, George Gunterman; sister, Norma Walters; nephew; a son-in-law, Russell Shapland; and a great-grandchild. Judy’s life was brimming with happiness in recent years with the welcoming of great-grandchildren; the relationships, engagements, and marriages of grandchildren; and the many educational and professional successes of her entire family. No matter the occasion, Judy was present with her support, excitement, a beautiful smile, and infectious laugh. Her family and community brought her joy, and to celebrate her life and the happiness she brought to each of us in return, services will be held this Saturday, September 7 at Rieth-Rohrer-Ehret Funeral Home, 311 S. Main St., Goshen. Visitation will be held 12-2 p.m. with the service, officiated by Pastor David Hackney, at 2 p.m. The burial will follow at New Paris Cemetery. Memorial donations may be directed to the New Paris Missionary Church. Online condolences may be sent at www.rrefh.com.

The family of Judith Kniesly created this Life Tributes page to make it easy to share your memories.

Send flowers to the Kniesly family.