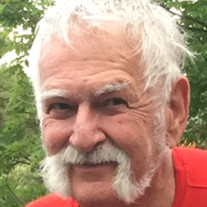 Jon E. Bontrager, age 82, of Goshen, IN passed away on Sunday, August 25, 2019 at 1:50 pm. He was born on August 11, 1937 the son of Edward J. and Wilhelmina “Billie” (Miller) Bontrager in Elkhart County, IN. Jon is survived by three children, Jim (Susie) Bontrager of Middlebury, IN, Nancy (James) Hoover of Elkhart, IN, and Mike (Jane) Bontrager of Goshen, IN; fifteen grandchildren; fourteen great-grandchildren; a sister, Diane Rice of California; along with two nieces, a nephew, and many friends. He was preceded in death by his parents; two children, Jerry Bontrager and Ronnie Bontrager; and a grandson, Josiah Bontrager. Jon was an avid historian with an expertise in trains, mills, covered bridges, anything steam related, and civil war history. He was a board member and depot master of the Wakarusa Historical Society and had helped educate thousands of kids by giving educational tours over the years. He was very active all of his life and still worked for Brebury Run as a driver for the Amish. Jon enjoyed taking trips with his grandchildren and was passionate about teaching them to read a map. In his younger years he enjoyed scuba diving, traveling, riding motorcycles, and stock car racing. A funeral service will be held in Jon’s honor on Friday, August 30, 2019 at 7PM at Rieth-Rohrer-Ehret Funeral Home, 311 South Main Street, Goshen, IN. Jon’s son, Jim Bontrager will officiate. A private family committal will be held at a later date. Family and friends will be received from 4-7 pm prior to the service on Friday at the funeral home. In lieu of flowers, memorial contributions may be given in Jon’s honor to the Wakarusa Historical Society for Depot/train projects, c/o Rieth-Rohrer-Ehret Funeral Home. Online condolences may be sent to the family online at www.rrefh.com

The family of Jon E. Bontrager created this Life Tributes page to make it easy to share your memories.

Send flowers to the Bontrager family.