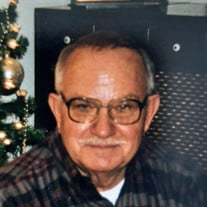 John A. Mikel, 96, Wakarusa, died 10:15 a.m. Wednesday, March 2, 2022 at the Maples at Waterford Crossing. He was born March 5, 1925, in St. Joseph County, to Virgil & Florence (Hawkins) Mikel. On December 30, 1950, at the Wakarusa Church of the Brethren, he married Dora Marie (Holmes) Mikel and she died April 3, 2001. Surviving are a daughter, Jane (Jeffrey) Jacobs, Goshen, sons, James (Tina) Mikel, Wakarusa, Steve (Sandy) Mikel, Wakarusa, 9 grandchildren, 15 great-grandchildren and 1 on the way, 4 great-great-grandchildren, 3 brothers Charles Mikel of Arkansas, William Mikel of Florida, George Mikel of Bremen, 3 sisters Virginia Smith of Elkhart, Carolyn (Marvin) Rutherford of Bristol, TN and Erma Jackson of Elkhart. Preceding him in death are his parents, wife, Dora, Siblings, Bemis Mikel Sr., Joy (Frank) VanDeKeere, Mary Mikel, Ruth Mikel, Wilma (Jim) Hepler, Ruby (Bob) Unsicker, and brother-in-law Art Smith. John served in WWII as a Merchant Marine and in the Army during the Korean War. He worked as a mechanic at Gate’s Chevrolet, Mishawaka and was a farmer. He was a member of the American Legion Post 50, Mishawaka, a member of the Wakarusa Church of the Brethren and a member of the Freemasons. He enjoyed spending time with his family and working on the farm. There will be a graveside service for family and friends 2 pm Wednesday, March 9, 2022 at Olive (West) Cemetery. Pastor John Schrock will officiate. Memorial donations may be directed to Traditions Hospice 1820 E. Day Road, Mishawaka, IN 46545. Online condolences may be submitted at www.rrefh.com

The family of John A. Mikel created this Life Tributes page to make it easy to share your memories.

Send flowers to the Mikel family.