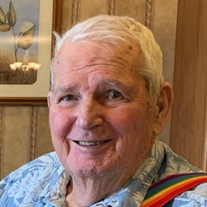 John J. Huitema, 96, Goshen, died 8:20 a.m. Monday, December 7, 2020, at The Maples at Waterford Crossing. He was a lifelong New Paris resident until he and his wife moved to Waterford Crossing. John was born November 19, 1924, in Grand Rapids,... View Obituary & Service Information

The family of John J. Huitema created this Life Tributes page to make it easy to share your memories.

Send flowers to the Huitema family.