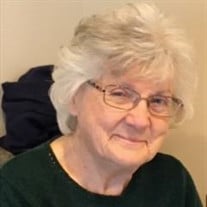 Joanne Jay Ditmer, age 86, died peacefully on June 7, 2019 in her residence at Hubbard Hill Estates in Elkhart, Indiana after a long illness. She is survived by four daughters: Jane (Randy) Hogue of Mishawaka, Judi DeLay of Arcanum, Ohio, Jean (Robert) Bjorkland of Mishawaka, and Jill (Mo) Vincic of Elkhart; 8 grandchildren: Lori (Mark) Rogers, Matthew (Angela) Bjorkland, James (Julie) Hogue, Christopher Bjorkland, Jonathan (Kristin) Hogue, Lindsay (Michael) Yoder, Ashley (Shaun) Hoskins, and Katie (Ben) Byler and 14 great-grandchildren: Connor, Alaina, Cohen, Eli, Carter, Natalie, Adelyn, Kamryn, Sophia, Zoey, Heyden, Liam, Noel and Mae. She is also survived by one sister, Connie (Roland) Fair. She is preceded in death by her husband of nearly 64 years, James Lee Ditmer, parents Forest and Dora Jay and 10 siblings Paul Jay, Gertrude Furlong, Kenny Jay, Miriam Harry, Isabel Covault, Ned Jay, Lowell Jay, Betty Zirkle, Gladys Jay and Robert Jay. Joanne was born at home in Pleasant Hill, Ohio on January 3, 1933 and was the next to youngest child of 12. The family lived in several residences in the Pleasant Hill and Fletcher area during her childhood years. She was very active in plays, the yearbook staff and a cheerleader during high school. She lost her mother to cancer when she was 14 and her older sisters took turns caring for her and her younger sister Connie. While staying with one of her sisters she met her future husband Jim and they were married in 1953 at Potsdam Missionary Church in Potsdam, Ohio. Their first home was an apartment in Piqua, Ohio and they purchased a home in Kettering, Ohio where they lived for 17 years. They moved to Strongsville, Ohio in 1972 and to the Wakarusa, Indiana area in 1988 when James became caretaker of Prairie Camp until his retirement in 2001. They resided in the Willows Retirement Community until James’ death in 2017 and Joanne became a resident of Hubbard Hill Estates. Joanne worked as a secretary in various organizations, insurance companies and Bashor Home but loved being a homemaker the most. She was a member of the Missionary Church, was very active in teaching and was an accomplished pianist and organist in congregations in Piqua, Dayton, and Strongsville in Ohio and Bethel and Liberty in Indiana. Playing the piano and organ gave her much joy and her home was filled with music, mostly hymns and fun sing-along songs. She loved Jesus, gardening, blue birds, kitties, babies, sewing, knitting, crossword puzzles and playing games. She dearly loved her children, grandchildren and great-grandchildren and was very protective of them. Family gatherings were important. Her most repeated saying was, “Come see me!” Visitation will be 5-7 p.m. Friday, June 14, 2019 at Rieth-Rohrer-Ehret Funeral Home, 311 S. Main St., Goshen, Indiana. Also, one hour prior to the 4 p.m. funeral service on Sunday, June 16, 2019, at Hubbard Hill Estates, 28070 CR 24 West, Elkhart, Indiana. Chaplain Dave Severence will officiate. No services on Saturday. Private family burial will be at Olive (East) Cemetery. Memorial donations may be directed to Prairie Camp, 3301 Benham Ave., Elkhart, IN 46517 or Hubbard Hill Estates, 28070 CR 24 West, Elkhart, IN 46517. Online condolences may be sent at www.rrefh.com

The family of Joanne Jay Ditmer created this Life Tributes page to make it easy to share your memories.