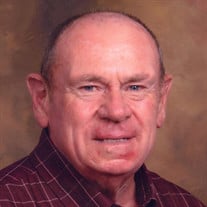 Jerry Wayne Needler, 73, New Paris, passed away at 10:20 PM on Thursday, October 17, 2019, in the peace and comfort of his home. He was born to Edna (Blanchard) and Ernest Needler in Bluffton, IN, the fourth of 5 children. Jerry spent much of his childhood outdoors, in the good company of his siblings and cousins. He laughed heartily at “Red Skelton.” He internalized his mother’s loving temperament. He graduated from Triton High School in 1964, with the nickname “Big Red.” Jerry worked in Agribusiness for over 50 years and retired from Edd’s Supply, Shipshewana, IN. His strength and his work ethic were extraordinary. Spring, Summer, and Fall, he left his home long before dawn and returned only after dark. During Winter and “semi-retirement,” he cut back to only 50 hours a week. Jerry spent his time off giving the same energy to community service. He volunteered for the Elkhart County 4-H Fair Board for over 40 years, serving as President in 1993. Jerry’s labor was formidable, and his strengths in this work went well beyond labor. He raised funds for building multiple permanent structures on the fairgrounds. He solved problems, both logistic and interpersonal. He improved the projects he inherited. He launched many new activities for the community to enjoy at the Fair. He started the Elkhart County 4-H ATV Club. For him, no task was too big or too small. Jerry loved his community. In addition to the Fair Board, he served on the New Paris Chamber of Commerce, as President for 2 years. He was a volunteer for New Paris Fire Department and was a Webelo Assistant Leader. Over the years, he supported numerous not-for-profit organizations. For all Jerry’s service and hard work, his greatest commitment was to his family. He married Vivian Scarbeary May 30, 1986. Together, they built a home and a wealth of memories for their children and grandchildren. Jerry enjoyed restoring tractors, riding snowmobiles, building campfires, pranking his friends, and napping in a hammock. He was always able to help his friends and family when needed. He spent most of his time listening, and when he spoke, everyone wanted to hear what he had to say. He was strong, smart, kind, and funny; and he made the people around him strong and happy. He is survived by his grateful family, thankful for the love, care, strength, and support he always gave: his wife, Vivian; his children: Trent (Shelly) Needler, Tara (Anthony) Powell, Kathy Jo Tully, Karen (Mike) Collins, Kristine (Paul) Petrulis, Kelly (Kees) de Waal, Francesca (Tyris) Varga; his grandchildren: Travis (Shelby) Needler, Tyler (Samantha) Needler, John (Paige) Gratton, Sophie and Olivia de Waal, Teagan and Riley Powell, Arianna Petrulis, Avabelle and Gianna Varga; his great grandchildren: Harilee and Barrett Needler. He is preceded in death by his sister, Coreen Weirick, and survived by his siblings, Lynda Nelson (North Carolina), Larry Needler (Warsaw, IN), and Gary Needler (Arkansas). A gathering will be held at Rieth-Rohrer-Ehret, Goshen, on Saturday, November 2, from 2:00–4:00 and 6:00–8:00. In the Spring, the family will also host a Celebration of Jerry’s Life at Jerry’s home in New Paris, IN (announcement to follow). In lieu of flowers, please make memorial donations to Goshen Health Foundation, 1701 South Main Street, Goshen, IN 46526, with Jerry Needler in memo. This will help LSVT—a local therapy organization for Parkinson’s Disease. Memorial donations to the Elkhart County 4-H ATV Club would also make him smile. Online condolences may be sent at www.rrefh.com

Jerry Wayne Needler, 73, New Paris, passed away at 10:20 PM on Thursday, October 17, 2019, in the peace and comfort of his home. He was born to Edna (Blanchard) and Ernest Needler in Bluffton, IN, the fourth of 5 children. Jerry spent much of... View Obituary & Service Information

The family of Jerry Wayne Needler created this Life Tributes page to make it easy to share your memories.

Send flowers to the Needler family.