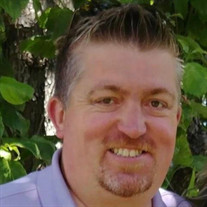 Jeremy C. Parsons, 43, Westfield, formerly of Goshen, died 2:20 a.m. Monday, Sept. 28, 2020. He was born March 4, 1977 in Goshen, to Terry & Lisa (Mishler) Parsons. On July 23, 2010, he married Courtney (Walsh) Parsons. Surviving are his wife, Courtney Kim Parsons, Westfield, formerly of Granger, son, Reid Patrick Parsons, Westfield, father, Terry Parsons, Goshen, sister, Josie Parsons, Goshen, Nephews, Robert & Liam, both of Goshen and nieces, Aubree & Laynee, both of Goshen. Preceding him in death are his mother Lisa and grandparents, Phil & Esther Mishler. Jeremy was a 1995 graduate of Goshen High School and attended Vincennes University for a short time. He worked for Meyer Plastics, Indianapolis, as a warehouse manager. He was a member of Trinity Baptist, Westfield. He was a very positive, fun loving guy who loved to just randomly go into his “BlackJack Parsons” booming radio voice. Jeremy loved spending his time with his wife and son doing simple things like mini golf, visiting the zoo, playing games and just spending time together laughing and being sarcastic. It was very special to both him and his sister that they shared a birthday. Jeremy loved to chase concerts all over the Midwest in an effort to see as many as possible from ALL his favorite bands, especially Bob Seger, the Doobie Brothers and The Eagles. He was a wrestling Referee for Independent Wrestling Association. He coached his son’s sports teams. Jeremy was very involved in advocating for PANCAN – even going to Washington DC to lobby Congress with his son, Reid. He loved watching classic TV, like, Andy Griffith, Lassie and MASH. Visitation will be noon – 2 p.m. Saturday, Oct. 3, 2020 with the funeral service following at 2 p.m., all at Rieth-Rohrer-Ehret Funeral Home, 311 S. Main St., Goshen. Pastor John Hines of Trinity Baptist Church, Westfield, will officiate. Memorial donations may be directed to the Pancreatic Cancer Action Network or Colorectal Cancer Alliance. Online condolences may be sent at www.rrefh.com

The family of Jeremy C. Parsons created this Life Tributes page to make it easy to share your memories.

Send flowers to the Parsons family.