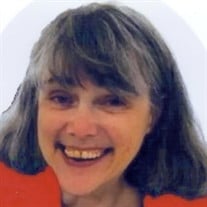 Jennie Barwick, age 67, of New Providence, Iowa, passed away Monday, February 24, 2020 at the EveryStep Kavanagh House in Des Moines, Iowa. She was born on November 14, 1952 at Goshen Hospital in Goshen, to E. Bruce Barwick and Jolene (Garber) Barwick. Jennie grew up in Middlebury and attended Northridge High School, graduating with the Class of 1971. After high school, she continued her education and went to Manchester College, graduating in 1976. She worked as a teacher and aide at Honeyville Elementary in Honeyville, York Elementary and Heritage Middle School in Middlebury. She moved to Iowa in 1993. She worked as a substitute teacher and at Quakerdale in New Providence, Iowa. Most recently, Jennie was a self-employed house cleaner. She was active at and served as a church musician for the First Presbyterian Church, Conrad, Iowa, Ivester Church of the Brethren, Grundy Center, Iowa and Honey Creek-New Providence Friends Church, New Providence, Iowa. She was a member of the Middlebury Church of the Brethren. Jennie was an avid knitter and taught others to enjoy it as well. She also enjoyed photography and reading. Those remaining to cherish her memory are her father E. Bruce (Cathy) Barwick of Mishawaka, mother Jolene Bollinger of Goshen, brother Tim (Deb) Barwick of Mishawaka, six nieces and nephews Anna Cooper, Bryce Barwick, Ben Barwick, Kate Barwick, Beth Brown and Dan Barwick; seven great nieces and nephews; with other relatives and friends. She was preceded in death by a brother John Douglas “Doug” Barwick. A graveside service will be 10 a.m. Saturday, March 7, 2020 at West Goshen Cemetery. Memorial contributions will be donated to the Middlebury and Rock Run Churches of the Brethren. Rieth-Rohrer-Ehret Funeral Home, Goshen, is in charge of local arrangements and online condolences may be sent at www.rrefh.com

The family of Jennie Barwick created this Life Tributes page to make it easy to share your memories.

Send flowers to the Barwick family.