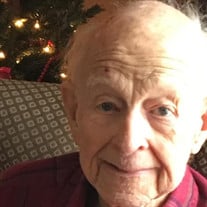 Jay Robert “Bob” Ochs, 92, Elkhart, formerly of Goshen, died 1 p.m., Monday, May 11, 2020 at Greenleaf Health Campus. He was born Jan. 20, 1928 in Toledo, Ohio, to Albert W. & Betty (Allspach) Ochs and raised in Cleveland, Ohio. He started his own drive in theater at the age of 19 in Muskegon, Michigan. A year later he opened a theater in Kalamazoo, Michigan where he met Delores and stayed until 1952. In 1953 they married and purchased the Midway Drive In Theater in Dunlap and owned until retirement in 1987. He came from a Theater family as his Father owned/operated more than 25 indoor and outdoor theaters. Four of his Uncles and his Sister also owned theaters. Surviving are a son, Paul (Julie) Ochs, Goshen, daughter-in-law, Elizabeth Ochs, Huntington, 5 grandchildren, Nick (Shawna) Ochs, Riley (Talea) Ochs, Emily (Kaleb) Carder, Ross (Hannah) Ochs, Ryan (Colbie) Ochs and 5 great-grandchildren. Preceding him in death are his parents, wife, son, Steven Ochs and a sister, Phyllis Anne Marecek. Bob was the equipment manager for the Cleveland Barons Hockey Club from 1948 thru 1953. This is where his love for hockey began and was passed down to his family. Bob and his wife Delores spent the winters in Bonita Beach, Florida. He was a member of the St. John the Evangelist Catholic Church, Goshen. Private family services will be held due to the COVID-19. Father Royce Gregerson will officiate and burial will follow at Violett Cemetery. In lieu of flowers, memorial donations may be directed to St. Jude Children’s Research Hospital. Rieth-Rohrer-Ehret Funeral Home, Goshen, is handling arrangements and online condolences may be sent at www.rrefh.com

The family of Jay Robert "Bob" Ochs created this Life Tributes page to make it easy to share your memories.

Send flowers to the Ochs family.