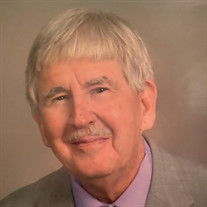 Jared Paul Smith, 84, Elkhart, entered Heaven on Wednesday, May 11, 2022, at Hubbard Hill Assisted Living. He was born to Harol and Golda (Hughes) Smith on October 28, 1937, in Wakarusa. Surviving are sisters, Kyra (Don) Mann of Colorado and Thelda Marie (Ray) Hauenstein of Arizona. His parents and two sisters, Verla Earl and Rita Smith preceded him in death. On November 4, 1961, he married Patricia A. Smith and she survives with 2 daughters, Ronda (Randy) Clark of Goshen and Lori (John) Good of Brooks, Georgia, five grandchildren, Roman (Jen) Yoder, Jori Yoder, Lance (Hayley) Good, Josiah Good and Leah Good and two great-granddaughters, Savannah Good and Emily Good. While stationed in the U.S. Army (1959-1962), in Massachusetts, he met Patti at her Church. After marrying, they moved back to Elkhart. Jared was a member of Beulah Missionary Church where he loved to usher. He worked at NIBCO foundry and went to Elkhart Institute of Technology for Dental Lab training, working at Ortho-Tek and Jared’s Ortho Lab for over 40 years. He loved fishing and SPORTS. Golf was his chosen hobby! Staying active, playing/pitching softball into age 80, was pure enjoyment. Competing in Shuffleboard Tournaments in Destin, Florida--usually winning. He also competed in Horse-Shoe throwing at the Elkhart Co. 4-H Fair and beat out those who play on teams and play regularly! He was VERY competitive! Visitation will be 1-3 p.m., with the funeral service following at 3 p.m. on Sunday, May 15, 2022, all at Beulah Missionary Church, 57595 Old CR 17, Goshen. Pastor Joel DeSelm will officiate and burial will follow at North Union Cemetery. Memorial donations may be directed to North Central Missionary Church or Goshen Hospice. Rieth Rohrer Ehret Lienhart Funeral Home, Wakarusa, is handling arrangements and online condolences may be sent at www.rrefh.com

The family of Jared Paul Smith created this Life Tributes page to make it easy to share your memories.

Send flowers to the Smith family.