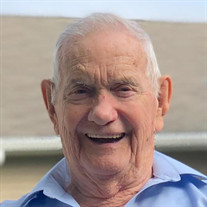 Rev. Jack E. DeVault, age 87, of Ligonier, IN, formerly of Dunlap, relocated to his heavenly father’s estate on Sunday, June 21, 2020. Although it came as a surprise on Father’s Day, we know it was when he was scheduled to leave, because he always told us that he “wouldn’t leave a day before The Lord called him home.” Had we known, we may have tried to argue. Grandpa was born on May 26, 1933 in Syracuse, IN. He was the devoted son of Wilbur Henry and Minnie Ann (LeCount) DeVault. He attended Syracuse High School and Moody Bible Institute in Chicago before he married Naomi Bennett on September 9, 1956. They had two beautiful daughters and shared over 46 years of marriage together, until Naomi’s heavenly relocation in 2003. He was a devoted husband that loved his wife, years after death separated them, a father that looked after his children long after they were grown, and a grandfather, by which all grandfathers should be molded and made. Grandpa was always going and doing. For many years, he went to Peddler’s Auction on Thursdays and then held garage sales at his home on the corner of CR 45 and CR 13 in Dunlap. He loved antiques, and had a knack for finding items that he could restore and resell. Whether it was cooking, doing yard work, going to auctions, or cleaning the church, grandpa made it fun and could make you forget that you were working. He was a great story teller, yet the world’s best listener. Throughout his life, grandpa had wisdom that only The Lord could give, but he would gladly share. He had a great sense of humor and unmatched wit to the very end. Grandpa labored inside and outside of the church his entire life. Known to his flock as Bro. Jack, he preached God’s word with skill and grace for over 60 years. He started working in a store at age 11 to help his family during WWII and never stopped. Grandpa worked as a butcher for over 30 years at Cable Line Market, and retired from Markley’s in Elkhart to pastor full time. He served in the Apostolic Pentecostal Church of Goshen for over six decades and pastored the church from 1993 to 2005. During his tenure, the church established a nursing home outreach team, a bus ministry, built relationships with numerous churches in the region, and sent a missions team to Brazil. A defender of the outcast and overlooked, Grandpa lived his life for others, and above all, he lived his life for Christ. Not merely in word, but in deed, his actions only amplified the sermons he preached. He will be deeply missed by a host of family and friends that includes, a beloved daughter, Melody Hall; a son-in-law, Patrick Blevins; two grandsons, Nathaniel (Chrisann) Blevins and Daniel Blevins; a granddaughter, Kristin Hall; great-grandchildren, Elizabeth (David) Hall, Thaddeus Blevins, Theodore Blevins, and Thatcher Blevins; a great-great-grandchild, Lakota Hall; an aunt, Alice Joe Haver; a special nephew, Steve (Rebecca) Ritchie; great-nephews, Ritchie Doerscher, and Charles (Jodi) Briggs; numerous cousins; all of Namoi’s surviving family in Tennessee that he counted as his own; and countless brothers and sisters in Christ. He was preceded in death by his wife; parents; daughter, Berthann Blevins; sister, Darlene Disher, and a son-in-law, Steve Hall. A service will be held in Rev. DeVault’s honor at 1pm on Saturday, June 27, 2020 at Abundant Life Church, 63983 CR 15, Goshen, IN 46526. In keeping with his wishes, his mortal body will be laid to rest next to Grandma’s at Baintertown Cemetery in New Paris at 10am prior to the afternoon service. Family and friends will be received from 4-7pm on Wednesday, June 24, 2020 at Yeager Funeral Home, 1589 Lincolnway South; Ligonier, IN 46767. A second visitation will be held from 2-4 and 6-8pm on Friday, June 26, 2020 at Rieth-Rohrer-Ehret Funeral Home, 311 South Main Street, Goshen. Memorial contributions may be given to Abundant Life Church for missions. Lastly, Grandpa was the epitome of humility and would be shaking his head at this obituary, but he read the obituaries everyday and knew these things happen. He also taught us as a family, that all things work together for good, even though we may not see it at the present. Yeager Funeral Home is caring for Grandpa Jack with family friends at Rieth-Rohrer-Ehret. Memories and condolences can be shared with the family online at www.yeagerfuneralhome.com.

Rev. Jack E. DeVault, age 87, of Ligonier, IN, formerly of Dunlap, relocated to his heavenly father&#8217;s estate on Sunday, June 21, 2020. Although it came as a surprise on Father&#8217;s Day, we know it was when he was scheduled to leave,... View Obituary & Service Information

The family of Rev. Jack E. DeVault created this Life Tributes page to make it easy to share your memories.

Send flowers to the DeVault family.