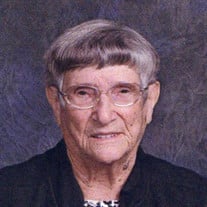 Georgia A. Snyder, 97, Goshen, died 4:05 a.m. Thursday, July 9, 2020 at Goshen Hospital. She was born Nov. 8, 1922 in Wawaka, to Nathan and Vada (Sparrow) Fulford. On June 28, 1941 in Ludlow, Kentucky, she married Harold A. Snyder and he died May 3, 2005. Georgia retired from Penn Controls in 1975. She spent many winters with her husband in Frostproof, Florida. Georgia was a member of the First United Methodist Church/Life Center and the Seekers Sunday School Class. She was a prayer warrior. Surviving are two daughters, Rosalie (Robert) Rock and Karen (Ernest) Pletcher, both of Goshen, 7 grandchildren, Regina (Keith) Goodman, Rodney (Leslie) Pletcher, Randy Rock, Gary Pletcher, Ginger Rock, Greg (Cindy) Pletcher and Chad (Angie) Pletcher, all of Goshen, 19 great-grandchildren, 10 great-great-grandchildren, two brothers-in-law, James Snyder and Claude (Pauline) Snyder and her best friend of 70 years, Nelda Carroll. Preceding her in death are 5 brothers, Marion, Donald, Paul, Joseph and Harry Fulford and a grandson, Richard Rock. Graveside services will be at Cosperville Cemetery at a later date. Pastor Diana Siegel of The Life Center and First United Methodist Church will officiate. Memorial donations may be directed to The Life Center. Rieth-Rohrer-Ehret Funeral Home is handling arrangements and condolences, memories and support may be sent through our website at www.rrefh.com or by mail to 311 S. Main St., Goshen, Indiana 46526.

The family of Georgia A. Snyder created this Life Tributes page to make it easy to share your memories.

Send flowers to the Snyder family.