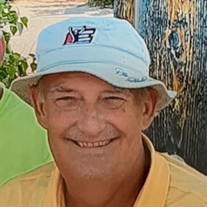 Gary R. Dausman, New Paris, lost his hard-fought battle with cancer and was received into the arms of Jesus on May 3, 2022. He was born October 1, 1960 in Goshen, IN to Raymond and Shirley (Kaser) Dausman. Gary graduated from Fairfield High School in 1979 and was in the top 10 in his class and earned a bachelor’s degree in civil engineering from Valparaiso University in 1983. He was a stand-out athlete in high school and was well known as a home run hitter in slow-pitch softball in the 1980s and 1990s. He worked at IWC, Stow Davis, and Borkholder Furniture before beginning his own furniture repair business, first as Furniture Medic and then independently as Dawg’s Furniture. Gary was also owner operator of the The Thirsty Owl, Millersburg and was a bartender for many years at Landmark Bar & Grille, New Paris. He was past president and member of the New Paris Chamber of Commerce, member and current chairman of the New Paris Conservancy District, longstanding charter organizer of New Paris Boy Scouts Troop 12, member of the Eagle Scouts, Precinct Committee Leader who helped run voting in New Paris since 2000, and was a part of Grace Community Church since its early days on Clinton Street in Goshen. He is survived by children, Ashley Marie Dausman of Logansport, Kelcie Nicole (Stephen) Cochrane of New Paris, Courtney Raye (Kyle) Fischer of Millersburg, mother of his children, Shannon (Jerry) Smith of Logansport, grandchildren, Braeden Michael, Stasia Marie Rose, Kynslie Lennox, Joel Lawrence Lamar, Sophia Ryleigh, and siblings, Alan V. Dausman of Michigamme, MI and Gail L. (John) Weybright of Milford, IN. He was preceded in death by his parents. Friends are invited to gather with the family between 11:30 AM and 2:30 PM on Saturday May 7, 2022, at Grace Community Church, 20076 CR 36, Goshen where a service to honor his life, officiated by his friend Pastor Jim Brown, will begin at 2:30 pm. A private family burial will follow at New Paris Cemetery. In lieu of flowers, memorials may be directed to Troop 12 Boy Scouts or Grace Community Church. Rieth Rohrer Ehret Funeral Home, Goshen, is handling arrangements and online condolences may be sent at www.rrefh.com

Gary R. Dausman, New Paris, lost his hard-fought battle with cancer and was received into the arms of Jesus on May 3, 2022. He was born October 1, 1960 in Goshen, IN to Raymond and Shirley (Kaser) Dausman. Gary graduated from Fairfield High... View Obituary & Service Information

The family of Gary R. Dausman created this Life Tributes page to make it easy to share your memories.

Send flowers to the Dausman family.