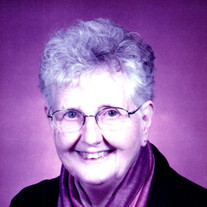 Elta Louise Ehret, 99 of Wakarusa, went to be with her Lord and Savior on Thursday, September 2, 2021 at her son Jerry’s home. She was born October 21, 1921 in Washington, IL to Walter E. and Matilda (Schertz) Yoder. She was married to Robert D. Ehret December 24, 1948 in San Juan, Puerto Rico. Elta graduated from La Junta Mennonite School of Nursing in 1945. She then returned to Goshen College to finish her degree in music. After being accepted by the Mennonite Mission Board she was assigned to a hospital in Aibonito, Puerto Rico where she met Robert Ehret. Twelve years after establishing their business (Ehret Funeral Home) in San Juan they moved their family back to the farm in Elkhart County reuniting with extended family. Elta & Robert were co-founders of the Good Samaritan Foundation that continues to fund institutions supporting spiritual, physical, and emotional health through local Puerto Rican institutions for more than sixty years. Among other things Elta became an avid quilter and joined her sisters in donating some of their quilts to Mennonite relief sales. Elta was a longtime member of the Wakarusa Missionary Church. She is preceded in death by her husband, Robert Ehret and siblings, Ruth Yoder, Harold Yoder, David Yoder, Paul Yoder, Mildred Yoder Troyer. Surviving are three children, Anita (Terry) Leyden of Littleton CO, Sam (Cathy) Ehret of Phoenix AZ, Jerry (Marlene) Ehret, eight grandchildren, Drew (Abby) Leyden, Sean Leyden, Heath (Megan) Ehret, Brant (Kimi) Ehret, Danae Ehret, Colin (Veronica) Ehret, Tyler Ehret, Shannon Ehret, three great-grandchildren Everly and Baker Ehret, & Beau Bertog, and one sister, Mary Troyer of Orville OH. Funny, spunky and using her smart phone until the very end, she will be sorely missed. Visitation will be held Saturday, September 11th, at 10:30 AM to 12:30 PM at Rieth Rohrer Ehret Funeral Home, 311 S. Main St. Goshen, IN 46526. A private family service will be live streamed following at 2 pm. That service can be watched on Elta’s tribute page on the funeral home website www.rrefh.com. Burial will follow at Olive (West) Cemetery. Pastor Ruben Chupp will be officiating. Memorial Contributions may be made to Heartland Hospice or Walter and Matilda Yoder Music Scholarship through Goshen College.

Elta Louise Ehret, 99 of Wakarusa, went to be with her Lord and Savior on Thursday, September 2, 2021 at her son Jerry&#8217;s home. She was born October 21, 1921 in Washington, IL to Walter E. and Matilda (Schertz) Yoder. She was married... View Obituary & Service Information

The family of Elta Louise Ehret created this Life Tributes page to make it easy to share your memories.

Elta Louise Ehret, 99 of Wakarusa, went to be with her Lord and...

Send flowers to the Ehret family.