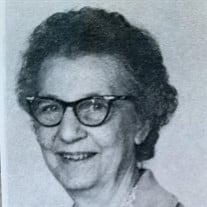 Eleanor (Secor) Harrington, 97, Wakarusa, died 1:28 a.m. Tuesday, January 28, 2020 at Miller’s Merry Manor. She was born October 28, 1922 in Jimtown to Floyd & Dora (Heffner) Secor. She and Charles E. Harrington of Wakarusa were married January 19, 1946 by Rev. Carl Yoder at the Osceola Church of the Brethren Parsonage. Charles preceded her in death on December 30, 1993 at Elkhart General Hospital, also 2 sisters, Geneva Bloom and Doris Barfell both of Elkhart, and a brother, E. Daniel “Danny” Secor of Jimtown. Eleanor was a member of the late Wakarusa Church of the Brethren, also of the South West Bible Church. She graduated from Jimtown High School in 1940. She was a member of the Nappanee Eastern Star, also President and past Presidents Club, President of the Waky Domestic Home Ec, President of the William Reed American Legion Auxiliary, President of the M.O.L.B., member of the Wade E. Harres Post 88 V.F.W. Auxiliary, member of the Happy Wanders Travel Club, member of C.T.S. Quarter Century Club, retiring from C.T.S. with 45 years of service, charter member of the Jimtown Historical Museum and President of the Le Femmes Club and a member of the Red Hats Society. Eleanor enjoyed playing the organ, raising flowers and sharing them with others and making scrap books. For numerous years, she wrote “Words of Wisdom” for the Wakarusa Tribune. She also donated the U.S. flag from Charles’ funeral to the Wakarusa Fire Department and two ¼ Ultra Glucometers to the Wakarusa E.M.S. She loved to travel visiting all 50 States, Islands and Principalities. She traveled in Europe, China, Japan, Africa and was one of the first persons from Elkhart County to tour Russia, also toured Cuba, Mexico and traveled around the World twice. Some of her good memories were to be chosen by the National Organization of the M.O.L.B. of Indiana to be a Flag Bearer for the Services at the Tomb of the Unknown Soldier in Washington D.C., walking on the Great Wall in China behind President Jimmy Carter, talking with President Harry Truman, meeting and becoming good friends with the grand old Lady, Myrtle Wrigley of the original Wrigley Gum Company and Leona Helmsley, and we were good friends until their deaths. In 2009, she by unanimous vote of the Trustees, Eleanor’s name was entered as a Charter Member and placed on the Honor Roll of the National World War II Museum in New Orleans, Louisiana. Visitation will be held at Rieth-Rohrer-Ehret-Lienhart Funeral Home, 117 W. Waterford St., Wakarusa, 1 hour prior to an 11 am funeral service on Thursday, January 30, 2020. Pastor David Stump will officiate. Burial will follow at Olive (West) Cemetery. Memorial donations may be directed to donor’s choice. Online condolences may be sent at www.rrefh.com

The family of Eleanor Harrington created this Life Tributes page to make it easy to share your memories.

Send flowers to the Harrington family.