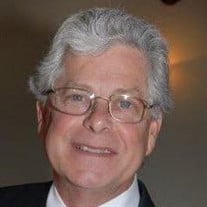 Edward A. Hutchinson, 72, Elkhart, died Saturday, March 2, 2019, at his home. He was born July 13, 1946 to John & Phyllis (Troup) Hutchinson in Goshen. He married Cynthia (Van Coevering) Hutchinson on March 17, 1984 and she died October 15, 2010. Surviving are two children, Ruth (Gregory) Zuber, Cecil, Ohio, John Hutchinson, Anchorage, Alaska, two grandchildren, June and Lane Zuber and a brother, Thomas “Tom” (Marsha) Hutchinson, Lafayette. Preceding him in death are his parents, two sisters, Sally Weaver & Molly Truex and a brother, John Hutchinson. Edward was a graduate of Goshen High School, class of 1964, where he ran cross country and was manager of the basketball team. He served in the U.S. Army and was discharged Jan. 5, 1972. Ed was a lifetime member of the VFW. He was highly involved at the local VFW Post 985, where he volunteered countless hours and served in various capacities, including two terms as commander. He was also a member of the American Legion, Moose and DAV. Ed enjoyed playing golf at various local courses, in the annual VFW golf outing and was a former member of the MapleCrest County Club. He always rooted for ND football even when they made it difficult. He enjoyed sharing dinner and drinks with friends, especially Sharon. Above all this, he loved and sacrificed for family and adored his two grandchildren. Ed retired from Cequent, formerly Reese Products. Visitation will be 1-4 p.m. Saturday, March 9, 2019, with the service following at 4 p.m. all at Rieth-Rohrer-Ehret Funeral Home, 311 S. Main St., Goshen. Pastor Ruben Chupp will officiate. Memorial donations may be directed to the VFW Post #985. Online condolences may be sent at www.rrefh.com

The family of Edward A. Hutchinson created this Life Tributes page to make it easy to share your memories.

Send flowers to the Hutchinson family.