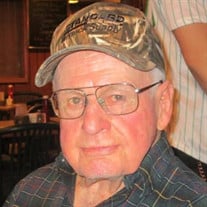 Dwight B. “Willie” Pletcher found his peace in eternal rest on Monday, July 26, 2021 at Courtyard Healthcare in Goshen, Indiana. Willie was 93 and lived a full life to the end, well loved by family and the many friends that knew him. Dwight is survived by his two children, daughter Theresa Pletcher of Kassel, Germany and son Steven (Paula) Pletcher of Indianapolis. He also leaves behind three grandchildren, Jacob, Hannah & Max Pletcher. He is survived by his brother, Virgil (Marcheta) Pletcher, Santa Ana, California, half-brother, Eldon (Karen) Pletcher, Goshen, half-sister, Carol Heuer, Richmond, Illinois and half-sister-in-law, Betty Pletcher, Goshen. Preceding him in death are his father, Calvin, his mother, Myrtle (Shank) Pletcher and step-mother, Grace Pletcher, 3 brothers, Claude E. Pletcher, Howard S. Pletcher, Floyd Pletcher, sister, Reta Lorenz and half-brother, Dayton Pletcher. Dwight was born on December 9, 1927 and grew up on the family farm west of Goshen. He was a 1946 graduate of Concord High School. After working for Rieth-Riley Construction for several years (where he was first tagged with the nickname “Willie” that stuck for life), Dwight enlisted in the U.S. Army in 1949 and was honorably discharged in 1951 having reached the rank of Sargent. He then returned to Rieth-Riley Construction where he remained for the entirety of his working life, first as a road grader operator and then as a Forman. Dwight was a man of many interests and talents. He was an amateur horticulturalist, fascinated by all things living and growing and ever-experimenting with grafting various strains of fruits together onto single trees. He was a master woodworker and mechanic - among his lifelong passions was first lovingly restoring a broken-down, rusted Rumley Oil Pull tractor to show-room condition, followed by the complete restoration of not one, but two antique Caterpillar Cat 10 farm tractors. He was a self-taught historian, first and foremost of his family’s history, enamored with his German heritage. He was also a student of Civil War history as well as local history, holding court and teaching all who cared to learn about Elkhart County history. One of the places that Willie regularly held court was Hunter’s Place in Elkhart, where, just like Norm from Cheers, everybody knew Willie’s name. Among his legacies for us all is to remain ever curious and never stop learning. Public services will be held at a later date. Burial will be in St. John Lutheran Cemetery, Goshen. In lieu of flowers, please make donations in Dwight’s name to Goshen Hospice, 1701 South Main Street, Goshen, IN 46526, or The Civil War Trust/Division of American Battlefield Trust. Rieth Rohrer Ehret Funeral Home, Goshen, is handling arrangements and online condolences may be sent at www.rrefh.com

Dwight B. &#8220;Willie&#8221; Pletcher found his peace in eternal rest on Monday, July 26, 2021 at Courtyard Healthcare in Goshen, Indiana. Willie was 93 and lived a full life to the end, well loved by family and the many friends that knew... View Obituary & Service Information

The family of Dwight B. Pletcher created this Life Tributes page to make it easy to share your memories.

Dwight B. “Willie” Pletcher found his peace in eternal rest on...

Send flowers to the Pletcher family.