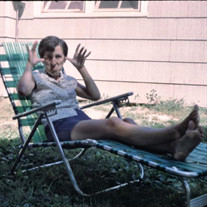 Doris Joann Kammerdiener (Getz), 87, of Syracuse, passed away on May 19, 2021. Her memorial service was held on Sunday May 23rd at Rieth-Rohrer-Ehret Funeral Home. The service was kept to just immediate family but can still be viewed online at rrefh.com and then you can click on her picture. Doris was born in Bristol, Indiana to Devon and Fern (Martin) Getz on August 2, 1933. She graduated from Wakarusa High School. She married Ralph Kammerdiener on December 3, 1954 and they have celebrated 66 years together. She worked as an Operator at the Chicago Telephone Company before she spent her days raising their five children. She also drove a school bus for Fairfield Community Schools, when her children were older, for a number of years. She was a member and actively involved in her church at Solomon’s Creek. Doris volunteered in countless activities in her community, some of which included Meals on Wheels, 4-H with her daughters, and the local Special Olympics. Many in the community may have fond memories of picking blueberries at their patch which she lovingly tended for many years. She never missed a ball game or extracurricular activity for any of her five children or eight grandchildren. Doris is preceded in death by her parents and her brother, Robert Getz. She is survived by her husband, Ralph Kammerdiener, her three daughters, Deb Plikerd, Diane (David) Granger, Nancy (Lee) Kauffman, her two sons, Ralph Jr. (Shari) Kammerdiener, Steve (Lisa) Kammerdiener, and her sister, Jan (Don) Lloyd. She also has 8 grandchildren—Matt (Megan) Granger, Bradley (Brennan) Granger, Ashley Kauffman, Amanda (Jason) Martin, Alyssa Kauffman, Payton Kammerdiener, Reid Kammerdiener, Wade Kammerdiener, and 8 great-grandchildren. Memorials may be given to Riley Children’s Hospital in one of two ways. Go to rileykids.org and select “Donate” in the top right corner and then select “Tribute Gift”. Or you may send a check to the funeral home in Doris’ honor.

Doris Joann Kammerdiener (Getz), 87, of Syracuse, passed away on May 19, 2021. Her memorial service was held on Sunday May 23rd at Rieth-Rohrer-Ehret Funeral Home. The service was kept to just immediate family but can still be viewed online... View Obituary & Service Information

The family of Doris J. Kammerdiener created this Life Tributes page to make it easy to share your memories.

Send flowers to the Kammerdiener family.