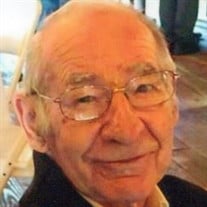 On Saturday, September 26, 2020, Donald Juday, Wakarusa, formerly of New Paris, Christ follower, loving husband and father of two children passed away at the age of 94. Don was born on February 11, 1926 to L.G. and Eva (Helman) Juday in New Paris, IN. On June 22, 1947 he married the love of his life, Margaret Louise (Reed) Juday and they have been happily married for 73 years. They raised a son and a daughter, Reed Juday, Wakarusa and Sue Cripe, New Paris. Don was a life long member of the New Paris Church of the Brethren and served there in many capacities through the years. He spent the first part of his adult life in the woodworking business, mostly at Coppes Napanee Kitchens. After retirement Don enjoyed a second 20 year career at Rieth-Rohrer-Ehret Funeral Homes. His last few years have been spent at Miller’s Merry Manor where he is known for loving, encouraging and complimenting everyone he encounters. Don enjoyed working with his hands and creating projects in his shop. He liked nothing better than spending time with his wife, Margee and they spent most of their days just being together. They had a little place in Avon Park, FL where they wintered for 20 years. He loved serving people and wherever he was he was doing something for someone. Don is survived by his wife, Margaret, his son, Reed and daughter in law Susan, his daughter Sue and son in law, Ron Cripe, sisters Phyllis Fox, Doris Leatherman and Betty Miller, brother in law Don Parcell, 8 grandchildren, 14 great grandchildren and 4 great-great-grandchildren. He was preceded in death by his father, L.G., his mother Eva, his brothers Bill and Farrell, a sister Helen, his son in law Gregory Snider and a great granddaughter Faith Elizabeth. A funeral service will be held on Saturday, October 3, at the New Paris Church of the Brethren with a viewing at 10:00 am and a service at 11:00 am followed by a private graveside service at New Paris Cemetery. Pastor Stan Godfrey will officiate. Masks and social distancing will be observed. In lieu of flowers, donations can be sent to New Paris Church of the Brethren. He will truly be missed. Rieth-Rohrer-Ehret Funeral Home, Goshen, is handling arrangements and online condolences may be sent at www.rrefh.com

On Saturday, September 26, 2020, Donald Juday, Wakarusa, formerly of New Paris, Christ follower, loving husband and father of two children passed away at the age of 94. Don was born on February 11, 1926 to L.G. and Eva (Helman) Juday in New... View Obituary & Service Information

The family of Donald Juday created this Life Tributes page to make it easy to share your memories.

Send flowers to the Juday family.