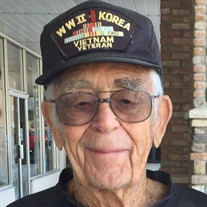 Donald “Dee” Arthur Markham, 101, passed away of natural causes, September 2, 2021, at Waterford Crossing in Goshen. He was born on November 5, 1919, in a little house on Wilden Avenue in Goshen to Clyde and Ethel (Cockran) Markham. On December 23, 1956, at Plymouth United Methodist Church in Goshen, he married his second wife, Martha “Marty” Lillian Burt. Surviving is a daughter Darlene (Steve) Gill of West Chester, OH, daughter-in-law Rosanne Markham of Goshen, IN, and adopted son, Mark (Maria) Markham of Guam; five grandchildren, Megan (Jerry) Williams, Samantha Markham, Weston Markham, Burt Markham, and Marian Markham, and one great-grandchild Mackenzie Williams. From his first marriage, daughter Sharol Wagemaker of Texas and son Terry (Pat) Markham of Akron, OH, and their families. He was proceeded in death by his parents, his wife of 56 years, Martha, and their son Dr. David Markham, first wife Rose, two brothers Richard and Earl Markham, three sisters: Fern Whitehead, Dorothy Zollinger, Betty Dascoli and son-in-law Ed Wagemaker Don's father was killed in an accident when he was a teenager. To help support his mother and sisters he took a job as part of the Civilian Conservation Corps (CCC) that helped build Pokagon State Park's campground. He'd talk about building trails, helping in the kitchen, and hauling sand onto the frozen lake to create a sandy beach when the ice melted. For a time he worked at Penn Controls in Goshen. Don was an United States Marine who served our country for over 24 years. He was a veteran of three wars: WWII, Korea, and Vietnam and earned the rank of Chief Warrant Officer. He was an electronics engineer and technical writer responsible for communications. He earned such medals as the National Defense Service Medal; Armed Forces Expeditionary Medal (Cuba); Vietnam Service Medal; Vietnam Campaign Medal; Combat Action Ribbon; Navy Commendation Medal; and the Good Conduct Medal. He was honorably discharge in 1969. Don has traveled the world. Although he lived most of his life in Goshen, IN, he lived for a short time in North Carolina, Hawaii, and for 30 years in Santa Ana, California. After retirement he worked for a time at Disneyland in souvenir shops and driving floats in the Electrical Parade. After moving back to Goshen he was a Red Coat at Goshen Hospital for many years and was a avid blood doner. In his free time he enjoyed making latch hook rugs, putting together puzzles, and going for long walks. He enjoyed traveling and vacationed in such places as Alaska, the Caribbean, Korea, Europe, and Australia. There will be no formal visitation. A private burial will be at Violett Cemetery at a later date. Rieth-Rohrer-Ehret Funeral Home, Goshen, is handling arrangements and online condolences may be sent at www.rrefh.com

The family of Donald "Dee" Arthur Markham created this Life Tributes page to make it easy to share your memories.

Send flowers to the Markham family.