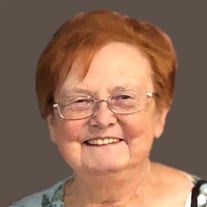 Diane T. Titterington, age 71, Goshen, formerly of Buffalo, New York, passed away Tuesday July 20th at her home in Goshen. She was born March 6, 1950, in Buffalo, New York to John and Irene (Stejbach) Barczak. On August 31, 1974, she married Norman D. Titterington. Surviving are her children, Peter John (Gloryanne) Titterington of New York, Lori (John) Jansen of New York, Norman (Audrey) Titterington II of New York, Jonathan (Linda) Titterington of Goshen, her beloved sister, Christine (Barczak) Proietta of New York and eight grandchildren. Preceding her in death are her parents, her husband, her sons, Stephen and Jeffrey Titterington, her brother, John Barczak, and her sister, Patricia (Barczak) Szarleta. Diane was a children’s shoe salesperson at the Boulevard Mall Bootery in Amherst, New York for many years. Prior to that she was a research technician at the University of Buffalo. She loved all sorts of crafts including knitting, sewing, and painting. She loved gardening. Her home was always filled with plants and flowers inside and out. She loved angels and had a collection of over 300 unique figures, most of them given to her as gifts from family and friends. She was a Buffalo Bills and Sabres fan and watched or listened to every game she could for both teams. Diane adored her grandchildren and spent as much time with them as she could. Her family was her life. Visitation will be 10 a.m.-12 p.m., with a memorial service following at 12 p.m. on Saturday, August 7, 2021 at Rieth Rohrer Ehret Funeral Home, 311 S. Main St., Goshen, Indiana. Pastor Tim Waits of Rock Run Church of the Brethren will officiate. In lieu of flowers, memorial donations may be directed to the Cystic Fibrosis Foundation (https://www.cff.org/give-today/). The service will be live-streamed through the rrefh.com website. Click on Diane’s Tribute page and then click on Photos/Videos. Online condolences may be sent at www.rrefh.com

The family of Diane T. Titterington created this Life Tributes page to make it easy to share your memories.

Send flowers to the Titterington family.