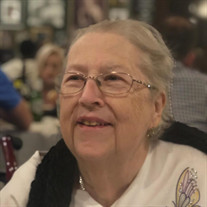 Diana Marie Gross, age 73, passed away on Wednesday, October 6, 2021, at Northside Hospital Cherokee in Canton, Georgia. She was born February 22, 1948, in Goshen, to Theodore & Alberta Irene (Hollar) Cripe. On January 23, 1971, she married David Eugene Gross in a beautiful ceremony at her hometown church. Diana devoted her life to her children as a homemaker; her dream was to be a wife and mother one day. She was a member of Grace United Methodist Church, New Paris. She graduated from New Paris High School in 1966 and attended Fort Wayne International Business School where she was the salutatorian (missing valedictorian by one point) and received an associate degree in accounting. Diana was much sassier than people knew but a gentle old soul. She had an amazing sense of humor, a smile that could move mountains and voice that could lull the most cantankerous child to sleep. She loved music, reading, baking, watching movies, and playing games. She treasured every moment at the beach and had a peculiar affinity for Gone With The Wind. Above all, she loved being surrounded by her family and thrived on the laughter, joy, and (inevitable) chaos created when all were together. Having only resided in Marietta, Georgia in recent years, Diana always considered New Paris her home. She is survived by her husband, David Gross, Marietta, Georgia, children, Karen (Robert) Spracklen, Mark (Christel) Gross, Jennifer (David) Mayhew, Fort Collins, Colorado, Elizabeth "Libby" (Clifford) Geiselmayr, Stephanie (Marc) Chalmers, grandchildren, Ethan, Luke, Galina Spracklen, Hunter, Aidan, Kylie Gross, Penelope “Penny” Mayhew, Leopold, Theodore Geiselmayr, Evelyn, Matthew, Andrew Chalmers, siblings, Jeanette (Ron) Kirkdorffer, New Paris, Carol (David) Smoker, New Paris, sisters-in-law, Jan Cripe, Waterford, Michigan and Corinne Cripe, Syracuse. Preceding her in death are her parents, sister, Jean Cripe, brothers, Richard Cripe and Donald Cripe. Visitation will be at Rieth Rohrer Ehret Funeral Home, 311 S. Main St., Goshen on Friday, October 15, 2021, from 3:00 pm to 7:00 pm. Funeral services will be at Grace United Methodist Church, New Paris, on Saturday, October 16, at 10:00 am. Burial will follow at West Goshen Cemetery. Pastor Greg Way will officiate. Online condolences may be sent at www.rrefh.com. Donations may be made to Fairfield High School Show Choir in Diana’s name in lieu of flowers if desired.

The family of Diana Marie Gross created this Life Tributes page to make it easy to share your memories.

Send flowers to the Gross family.