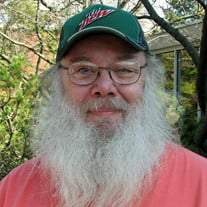 Daniel Thomas Brimhall, 59, known as Dan or “Big Dog” to his friends, died of a heart attack on Tuesday, July 30, 2019, at Goshen Hospital. Born July 15, 1960, in Oakland County, Michigan, Dan moved to Goshen in the mid ’80s. He spoke often, with great affection, of his late parents, Thomas and Dona (Owen) Brimhall. Dan is survived by a sister, Diane (Brimhall) Wyatt; a girlfriend, Renee Prescott; and many close friends and members of his church family. Since 2002, Dan was a member of Faith Mennonite Church in Goshen, where he faithfully served in many ways. In Faith’s 2011 production of the musical Godspell, Dan’s rich baritone supplied the offstage voice of God. Dan was a member of the church council and worship committee and was responsible for lining up volunteers to bring food to church every week. He was always prepared to make copies and run the sound system on Sundays. Throughout the year, he made sure everyone received a personalized birthday card from the congregation, sometimes featuring his love for coloring. Dan let everyone know they were welcome and had a friend. As a young man, Dan enjoyed camping and fishing with the Boy Scouts as a troop leader. He worked as a security guard, truck driver, and Wal-Mart employee. He was an avid Nascar fan. Dan will be remembered as a kind, tender-hearted man who freely expressed his love for his friends and as a comedian whose perfectly timed jokes and comebacks artfully poked fun at himself and observed the absurdity and blessing of daily life. He will be greatly missed. Funeral service will be 6 p.m. Friday, August 2, 2019, at Assembly & Faith Meeting House, 727 New York St., Goshen. Pastor Deron Bergstresser & Pastor Kay Bontrager-Singer will officiate. Rieth-Rohrer-Ehret Funeral Home, Goshen, is handling arrangements and online condolences may be sent at www.rrefh.com

The family of Daniel Thomas Brimhall created this Life Tributes page to make it easy to share your memories.

Send flowers to the Brimhall family.