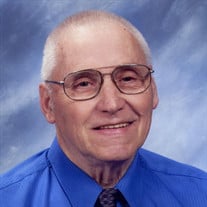 Carl E. Kniesly, 90, Goshen, passed peacefully on August 13, 2020. Carl spent his life bringing a smile to the faces of those around him. He spent his days supporting, loving, and entertaining his family and community. Those who knew Carl benefitted from his giving spirit and his propensity to teach and lead others. His family and friends learned numerous practical and life skills under Carl’s guidance. Carl was born May 24, 1930 to Harold and Mary (Hoover), and he spent childhood with his sisters in Montgomery County, Ohio. He attended Messiah College in Pennsylvania for high school courses and later worked as a delivery driver. Music and animals were his true passions, and for many years, he sang with barbershop quartets and assisted with local 4H groups. In later years, Carl and his wife, Judy, made beautiful handmade candles as Kountry Kraft Kandles before their retirement when he then engaged in custodial work at local churches. He was a member of New Paris Missionary Church. With his first wife, he welcomed sons Kenneth (Rikki), Elkhart, and Keith (Carol), Florida. Upon marrying Judy (Gunterman) on May 29, 1964, the family grew with stepdaughters Deborah (Charles) Hudson, Westfield, Shirley Shapland, Elkhart, and later with the births of Kevin (Teresa), Logansport, and John (Marla), Elkhart. Last year, Carl and Judy celebrated 55 years of marriage. He was the loving grandfather of 17 grandchildren and 26 great-grandchildren. His children and grandchildren will forever cherish the many memories made with Carl laughing at family gatherings, helping to collect eggs or feed the chickens in the yard, assisting in the candle shop, and more. Preceding him in death are his wife, Judy; his parents; sisters Pauline Herr and Mildred Brubaker; a son-in-law, Russell Shapland; and a great-grandchild. To celebrate Carl’s life and the happiness he brought to his family and community, services will be held this Monday, August 17 at Rieth-Rohrer-Ehret Funeral Home, 311 S. Main St., Goshen. Visitation will be held 12-1 p.m. with the service, officiated by Pastor David Hackney, at 1 p.m. The burial will follow at New Paris Cemetery. Memorial donations may be directed to the New Paris Missionary Church. Online condolences may be sent at www.rrefh.com.

Carl E. Kniesly, 90, Goshen, passed peacefully on August 13, 2020. Carl spent his life bringing a smile to the faces of those around him. He spent his days supporting, loving, and entertaining his family and community. Those who knew Carl benefitted... View Obituary & Service Information

The family of Carl E. Kniesly created this Life Tributes page to make it easy to share your memories.

Send flowers to the Kniesly family.