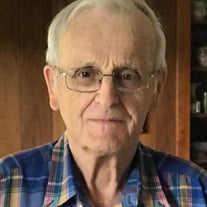 Arlen E. Slabaugh, of Plymouth, IN, peacefully passed away in his home surrounded by loved ones Sunday, November 22, 2020, at the age of 89 years old. Arlen was born August 11, 1931, in Nappanee, IN to Verda I. Geyer and Howard K. Slabaugh. He attended grade school in a one-room schoolhouse in Union Center before attending his 9th and 10th grade years at New Paris Highschool and his 11th and 12th years at Nappanee Highschool. He enjoyed playing softball on his Union Center Church Team. Arlen and Neva met while in high school and soon after were married in 1955. They spent many years enjoying their avid love for traveling driving cross country from Indiana to Central America exploring Guatemala, Mexico, Belize, and Costa Rica. Arlen ran and co-owned the Napana filling station in Nappanee for over 15 years while his wife Neva ran the B&K next door during some of the summer months. After moving to Sarasota, FL in 1971 Neva and Arlen welcomed their third child Gina Elizabeth Slabaugh into the world. While living in Sarasota, FL Arlen found a new passion for the ocean deep sea fishing and not long after became The Captain of the "Captain Anderson" and the "Flying Fish" chartering daily and even overnight fishing trips. Arlen and Neva were very active in their Sarasota Tabernacle Church as members of the choir. After spending 14 years in Sarasota, FL Arlen, Neva, and Gina returned to Indiana where they eventually settled into their home in Plymouth, IN, and remained living out their life together entertaining friends and family Arlen is preceded in death by his wife Neva J. Slabaugh (Hochstetler), as well as their children Clinton Slabaugh, Lisa Slabaugh, and Gina Slabaugh. He is survived by his granddaughter Lela M. Crawford, Alex Benson (grandson in law), and his four great-grandchildren as well as his Sister's Donna Reamer and Alice Hartman along with nieces and nephews. Private family graveside services will be held Friday, November 27, 2020 at Union Center Cemetery. Pastor Jeff Cooper will officiate. Memorial donations may be directed to Plymouth Hospice. Rieth-Rohrer-Ehret-Lienhart Funeral Home, Wakarusa, is handling arrangements and online condolences may be sent at www.rrefh.com

Arlen E. Slabaugh, of Plymouth, IN, peacefully passed away in his home surrounded by loved ones Sunday, November 22, 2020, at the age of 89 years old. Arlen was born August 11, 1931, in Nappanee, IN to Verda I. Geyer and Howard K. Slabaugh.... View Obituary & Service Information

The family of Arlen E. Slabaugh created this Life Tributes page to make it easy to share your memories.

Arlen E. Slabaugh, of Plymouth, IN, peacefully passed away in...

Send flowers to the Slabaugh family.