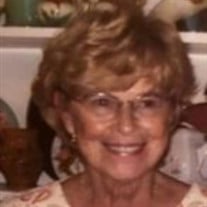 Ann Katherine Watson Singer Gibson, Goshen, died suddenly on Saturday, August 15, 2020, surrounded by her family, at Goshen Hospital. She was born May 10, 1934 in Detroit, Michigan, to Cecil Charles & Margaret (Lawson) Watson. She was preceded in death by her parents and husband, Jack Gibson, and former husband, Tom Singer. Surviving are, Jennifer Singer (John Dolezal), Goshen, Rebecca Singer (John Fonash), Granger, Katherine Singer (Joel Williams), Elkhart and grandchildren, Justin Dolezal (Sasha Gaona), Allison Dolezal (Laura Dutra), Anna Dolezal, Laura Dolezal, Isla & Esther Williams. Ann attended Grosse Point High School. She graduated from the University of Michigan in 1956, with a B.A. in Elementary Education and was a member of the Alpha Phi sorority. In 1977, Ann received a M.S. in Guidance and Counseling from Indiana University South Bend. As an elective, Ann studied Puppet Therapy along with other aspects of counseling. Ann was a counselor at the former Rice Elementary School in Elkhart. In 1980, Ann married Jack Gibson and moved to Goshen, IN. Ann began teaching at Parkside Elementary school. Ann’s warmth and ease in talking to new people allowed her to quickly make new friends. She became a member of the Tri Kappa service sorority in Goshen, whose purpose was charity, culture and education. Ann was absolutely delighted to become a grandmother and developed her own special relationship with each of her grandchildren. She was a hands-on grandma, always up for an adventure or road trip. She was fiercely proud of her grandchildren and treasured spending time with them. Ann loved sharing games and songs from her childhood and telling family stories. She enjoyed attending her grandkids’ concerts, musicals, dance recitals, school plays, as well as soccer and tennis matches, and basketball games. Ann loved music and frequently played her piano at home. The family often sang and played instruments together. She loved playing tennis, swimming and having long conversations with her friends. She was a devoted listener of Studs Terkel’s “Midnight Special” on WFMT Chicago. Ann loved surrounding herself with art and literature and enjoyed friendships with professors and visiting scholars from Notre Dame, St. Mary’s, Indiana University South Bend and Goshen College. It was interesting as a child of Ann’s to meet people from all over the world, learning about their cultures, traditions, and food. Ann tried to expose her daughters to every possible wonderful aspect of life firsthand. As an only child, Ann developed a passion for reading which lasted all her life. During the many years she lived in South Bend, she belonged to a “Study Group” (now called a “book club”) at the 1st Unitarian Church of South Bend. She participated in several book groups throughout her life and, in 1990, was a founding member of the Fair and Tender Ladies Book Club in Goshen. Even after the print in her books kept getting smaller and smaller, she learned how to navigate her Kindle and have books read to her. She loved to make lists of favorite books, movies, or funny names. These lists were ever changing. Ann believed in the goodness of people. She was a member of Another Mother for Peace and the Catholic Interracial Council, and took her young daughters to demonstrate and protest against the Vietnam war, racism, and other social justice issues. She and Jack loved to travel and were able to visit incredible sites all over the world. Some of her favorite memories were flying over Angel Falls in Venezuela and participating in the Day of the Dead Festival in Mexico City. She especially loved the annual summer vacations to Watervale in Northern Michigan with her family and friends. Ann was able to go one last time to Watervale this July. Ann’s family and many friends recall her love of sharing stories, her incredible vocabulary, her positive attitude, her joy and laughter, and her willingness to always offer a kind word. She had a way of making anyone she talked to feel special. On Saturday, September 26th, friends may call from 11:00 am to 1:00 pm, with a Celebration of Life Service immediately following at Rieth-Rohrer-Ehret Funeral Home, 311 S. Main St., Goshen. Online condolences may be sent at www.rrefh.com Memorials may be directed to the ACLU or Shriners Hospital.

The family of Ann Katherine Watson Singer Gibson created this Life Tributes page to make it easy to share your memories.